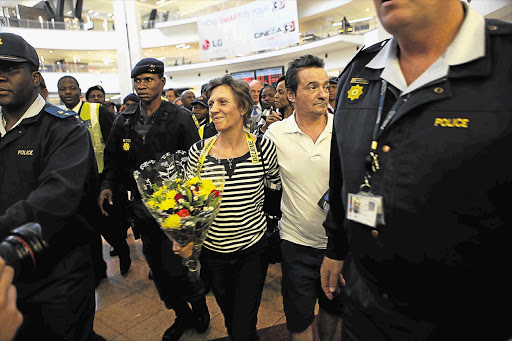 WARM WELCOME: Police surround Debbie Calitz and Bruno Pelizzari on their arrival at OR Tambo International Airport in Johannesburg on June 27 after their release by Somali pirates. Calitz was arrested on Friday after police allegedly found drugs in her Pretoria flat
Image: ALON SKUY

SOMALI pirate kidnap survivor Debbie Calitz has been arrested in a police drugs raid, allegedly in possession of thousands of rands worth of narcotics.

The raid on Calitz's Pretoria home on Friday was almost six months after she and her former long-term partner, Bruno Pelizzari, were released from captivity in Somalia, where they were held for nearly two years.

They made international headlines when they were kidnapped while sailing from Kenya to South Africa.

Held for months in numerous locations and sold successively to various pirate gangs, the two were freed in a military operation involving Italian and Somali transitional government, troops in June.

The South African government played a crucial behind-the-scenes role in securing the couple's release and the public made donations to a trust fund set up by the couple's families.

Friday's arrest occurred after Brooklyn and Garsfontein police were told that Calitz was using her Constantia Park flat to grow dagga and powerfully hallucinogenic "magic mushrooms".

Raiding the flat, which Calitz shares with her son and daughter, police were confronted by an ''arrogant" Calitz, whom, they said, tried to use her celebrity status to prevent officers from arresting her and several other people.

Seven people were arrested in the raid.

A police source said Calitz had been extremely proud of herself.

''She was throwing her name out like it would mean something to us. She was carrying on as though we would turn around and walk out," he said.

The officer said that when he and his colleagues tried to explain to Calitiz why they were arresting her, she told them that they did not know what they were doing.

''Debbie kept on saying she was not hurting anyone or breaking the law . ''

He said that during the arrest officers recovered dagga, a dagga plant, "magic mushrooms" and narcotics-related paraphernalia.

The police yesterday confirmed the arrest of two women, including Calitz, and five men.

"We can confirm that Debbie Calitz was one of seven people arrested for the possession of drugs on Friday," said Captain Pinky Tsinyane

The seven suspects will appear in the Hatfield Community Court today on charges of drug possession.

Calitz was arrested shortly after the release of a book on her ordeal titled Debbie Calitz: 20 Months in Hostage Hell.

A shocked Pelizzari said yesterday from Tanzania that he could do nothing more than feel sorry for his former partner, Calitz.

The couple separated recently and he is now working in Tanzania.

''I can't do anything to be there for her because my priority is my boat. I cannot leave it. It's my life and my life savings, but Debbie didn't want to come back to the boat and that's that,'' Pelizzari said from Dar es Salaam yesterday.

''Debbie is not coming to Dar-es-Salaam and I am not going to Pretoria, so I am not really sure what we are any more."

"As far as I know, she did not use drugs. Poor Debbie. I really just feel sorry for her. After all that she has been through and now this to happen to her."

Pelizzari said the implications of Calitz's arrest would be devastating and that he expected people to suggest a drug link in the couple's kidnapping.

"We are in the public eye and people are anti-drugs so this puts us in a bad light.

"But people know me, and even here at the yacht club, know the type of person that I am. I am not involved in any such things.

"I am happy working on my boat and that's my only priority."

Pelizzari and Calitz were aboard a yacht skippered by Peter Eldridge when Somali pirates boarded the boat on October 26 2010 off the coast of Tanzania.

An EU warship rescued Eldridge and on his return to South Africa he narrated his traumatic experience.

Eldridge, who lived on his yacht off the coast of Dar-es-Salaam, was returning to Richards Bay to visit his family when he asked the couple to crew for him.

The pirates holding Pelizzari and Calitz at first reportedly demanded a ransom of $500000 but later increased their demand to $4-million.

But relatives of the two have said their captors originally demanded $10-million, and South African officials and other sources have indicated that the family was able to raise between R600000 and R800000.

The Somali community believed the final ransom was about $700000, and the most likely source of the difference was the Italian government.

Pelizzari and Calitz were fed only rice and shared no more than two litres of water a day.