'Nothing new from Zuma' 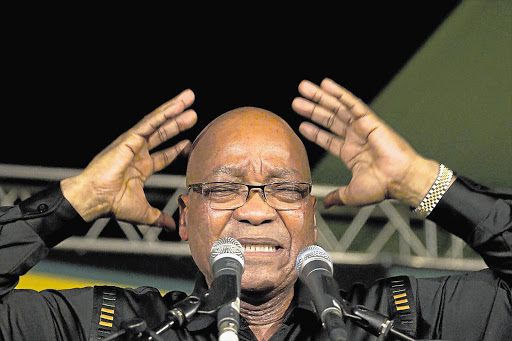 PROBLEM SOLVED: A reader suggests Jacob Zuma be renamed after a member of TV's 'A Team'
Image: GALLO/GETTY

ANC president Jacob Zuma's address to mark the party's 101st anniversary at the weekend is expected to be a regurgitation of his speeches over the past year with no ground-breaking announcements, political analysts say.

The ANC's 100th birthday, the party's achievements, social inequalities, education and factionalism within the party will feature prominently. He is likely to talk about the national development plan, developed during his first term as president of the country.

Zuma will this weekend address thousands of ANC delegates at Kings Park Stadium in Durban.

On Sunday he spoke at the stadium to mark the closing of the centenary celebrations and has given several lectures in the past year. He spoke after his re-election in Mangaung last month.

Political analyst Professor Shadrack Gutto, from the University of South Africa, said: "There have been too many meetings, conferences and lectures since the ANC started celebrating its centenary so I don't think the president will say anything groundbreaking.

"We will hear more of the same rhetoric on unemployment, inequalities and the racialised nature of it. But I don't think there will be anything new."

Gutto said social inequality was nothing new, but South Africa was a capitalist country and was "growing at an alarming rate".

"President Zuma is likely to repeat the same things about the economic plan, which has been accepted by the party, and he may touch on issues of law and crime.

"He will also have to explain to the country why he sent a military contingent to the Central African Republic. He owes the public an explanation because he cannot just announce that they are going but not give reasons why," Gutto said.

"Zuma is a populist, so I don't think he will miss the opportunity to say how well the matrics have done and also boast about the party celebrating 100 years last year," he said.

Professor Susan Booysen, political analyst at the University of the Witwatersrand, did not expect any "dramatic announcements and initiatives".

"We saw at the Mangaung conference that there was a declaration of self-congratulation and the ANC wants to say that things are all right within the party.

"The ANC is trying to show that Zuma is the ultimate leader and that all the policies are working . They are trying to convey a message that they are united so I don't see any turnaround plans."

While Booysen was confident that Zuma was likely to discuss the problem of ill-disciplined cadres, she said she would be surprised if any concrete plans to deal with them would be mentioned in his speech.

"Discipline is an important tool for the ANC and it likes to regard itself as a disciplined organisation, but we have seen less action taken.

"If the president [is to] mention anything groundbreaking in his speech there has been no sign of it," she said.

Professor Somadoda Fikeni of the Walter Sisulu University said Zuma would not deliver any surprises but would probably save them for his state of the nation address next month.

"He is most likely to stay on the subjects raised at the Mangaung conference but now he will add a bit of bragging about the matric results. He will say: 'See, my plan of separating higher and basic education is working.'

"I think we will hear him talk about unity because there are many people who are anxious that the purging [of Kgalema Motlanthe supporters] will begin.

"We might also get a glimpse of what the state of the nation address will say in terms of programmes, but nothing new and surprising," Fikeni said.