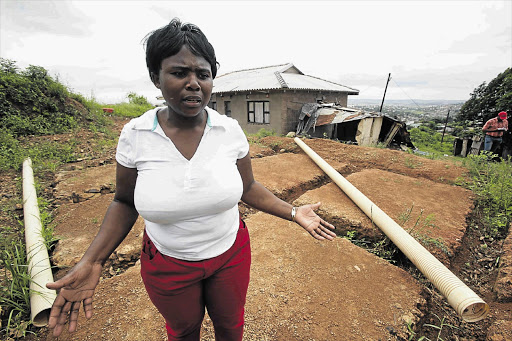 Hlengiwe Msweli next to the site on which the eThekwini municipality wants to build a low-cost house for her in Inanda, outside Durban. Behind her is her home, which she fears will be demolished by the municipality to make way for an access road Picture: THULI DLAMINI

A Durban family has asked the public protector to block attempts by the eThekwini municipality to demolish their house.

The Msweli family fear that the city will bulldoze their six-room house in Ohlange, north of Durban, to make way for an access road as part of a low-cost housing project currently under way.

The public protector's office in Durban yesterday confirmed that a complaint had been made by a member of the Msweli family and a meeting would be held between the family and the municipality.

"We have been fighting this for three years now and for the past weeks, construction vehicles and bulldozers have been parking near our home ready to demolish it," said Hlengiwe Msweli.

She claimed that the land belonged to her father, Robert Msweli, who obtained a plot from the first ANC president, John Dube. The entire area was said to be owned by the Dube family long before the municipality existed.

"When we went to the deeds office in Pietermaritzburg they gave us papers confirming that the plot belonged to my father. We have tried hard to stop them demolishing our home because, if they succeed, we don't have anywhere else to go," she said.

But the municipality yesterday insisted that the house would not be demolished and that it had advised the Mswelis to approach the public protector.

"The access road will only go near the yard and not the house. It's wrong for them to say that we want to demolish their house," said Joe Nene, special adviser to Durban mayor James Nxumalo.

Nene said the city bought a large plot of land for the development from a seller who bought it from a third party.

Ward councillor Thulani Kunju said the family could not produce a title deed for the property.