Igesund: We had belief all along 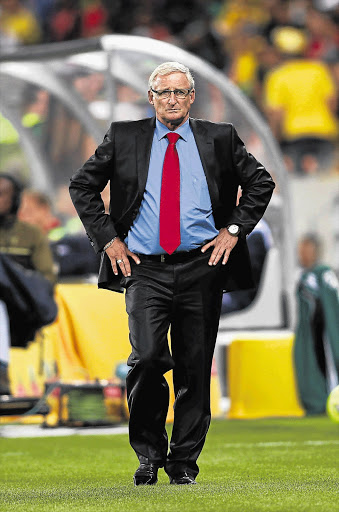 Bafana Bafana have always believed anything is possible in the Africa Cup of Nations, said coach Gordon Igesund after Sunday night's dramatic 2-2 draw against Morocco at Moses Mabhida Stadium to reach the quarterfinals.

South Africa showed fight to twice come back from a goal down and reach the knockout stages of the Afcon for the first time since 2002.

Morocco, who had disappointed before this match, came to life against Bafana, with dynamic passing that threatened to tear the hosts apart. But the South Africans hung on, and fought back from Issam El Adoua's 10th-minute opener and Abdelilah Hafdi's 82nd-minute strike with goals from May Mahlangu (71st minute) and Siyabonga Sangweni (87th).

After losing his cool at the press at times before the tournament, Igesund has been the model of reserve in his interviews and press conferences during the Nations Cup.

But asked if he believes anything is possible now his team have reached the knockout stages, the coach allowed himself a fired-up response.

"The question is do you believe it's possible?" he countered.

"I've said it from day one and I can't keep answering the same question. Because we've qualified now and there's two games to the final and, of course, I believe - I've believed all along. You've always got to be positive and have the right frame of mind and it rubs off on your players."

Bafana were saved on three occasions in one-on-ones by goalkeeper Itumeleng Khune, who also missed a corner to concede Morocco's opener.

Igesund admitted South Africa rode their luck, but said he would sort out the negatives during training.

The coach said his brain had been racing with the permutations in the frenetic last 10 minutes as Group A went down to the wire because of Cape Verde's late winner against Angola which helped them to qualify in second place.

The 2-1 result in Port Elizabeth meant Bafana would have been out of the Afcon had Sangweni not scored.