The approach to success has changed 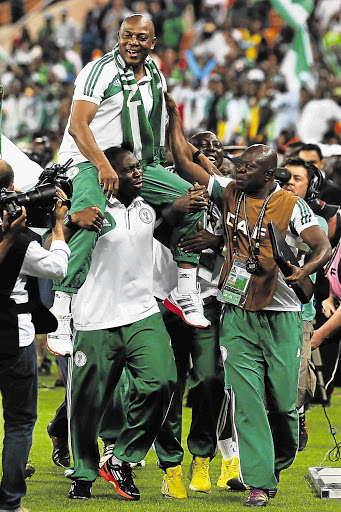 Nigeria were "worthy winners" of the Cup of Nations, said Burkina Faso coach Paul Put - and so they were. With a bit more luck, they could easily have won all three games in the group stage.

They conceded a late equaliser against Burkina Faso after the otherwise excellent Godfrey Oboabona stumbled on the sandy surface at Mbombela, and lost their lead against Zambia because of an extremely soft penalty.

They were the better team in the titanic quarterfinal against Ivory Coast, crushed Mali in the semifinal and then did enough to beat the Burkinabes in the final.

Coach Stephen Keshi is to be lauded for forging a compact side that attacked with great pace on the flanks, all the more so given the political pressures that are always brought to bear on Nigerian coaches. His policy of omitting those who didn't seem committed enough, even if that meant selecting players from the domestic league, was emphatically vindicated. The squad captain, Joseph Yobo, a veteran of six Cups of Nations, spoke of this as the most unified squad he has ever known.

In achieving success through the fostering of team spirit and organisation, Keshi copies what Herve Renard did with Zambia last year, and Oscar Washington Tabarez with Uruguay in the Copa America in 2011.

Last February I visited the great former Cameroon goalkeeper Joseph-Antoine Bell at his house in Douala. He made the point that, in 2008, Cameroon had beaten Zambia 5-1 at the Cup of Nations; in 2010 they'd beaten them 3-2; and then in 2012 Cameroon had failed to qualify while Zambia had won it.

Zambia, with their humility, work ethic and organisation, he said, were a model for every side.

He's right, of course, and it's one of Keshi's great achievements that he's managed to cast off the star mentality and dampen the egos that have so often undermined Nigerian football. The same virtues carried Burkina Faso to the final and Mali to a second successive third place.

And yet it's hard not to think: "Is that it?" Surely humility, work ethic and organisation should be a given, rather than the preserve of a handful of teams? There's always a sense, when a functional team succeeds, that it is as much the result of the failings of the other teams as of the winner's efforts.

What wins games, surely, should be the dash of magic, a moment of skill or of great physical courage?

Sunday Mba provided that in the final with a stunning goal but this, sadly, was a tournament with few such moments.

This is not just a problem of the Cup of Nations but of international football. Perhaps, 25 years ago, the World Cup was still the apogee of the game but now the quality in the Champions League clearly outstrips it. As football has become more systematised, not only from a defensive but also from an attacking point of view, a mutual understanding between players has become increasingly important: knowing where a player is likely to make a run allows a pass to be played a vital fraction of a second earlier.

Given the limited time available at international level, it's almost impossible for national teams to generate that level of understanding and the result is that international football often appears stodgy, particularly as so many managers focus first on building a defensive base.

The approach of Nigeria, Zambia and Uruguay is logical - team spirit plus solid defence plus a couple of creative players equals success - but it tends to mean the joy is in the drama rather than in the quality of the football.