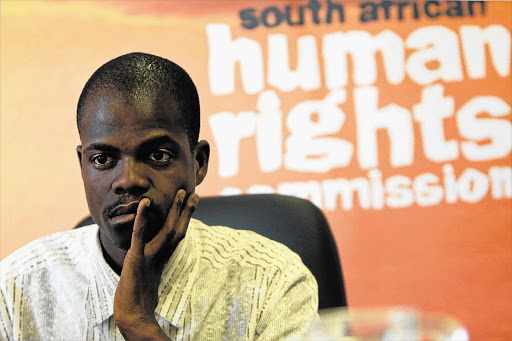 Zama Khumalo has apologised to the families of the victims of the 1985 Westdene Dam bus disaster after mediation by the SA Human Rights Commission Picture: MOELETSI MABE

When Zama Khumalo updated his Facebook status on January 24 he never thought it would elicit a huge public outcry.

The Facebook update that enraged many was in "celebration" of the 42 white schoolchildren were killed in the Westdene bus tragedy on March 27 1985, three years before Khumalo was born. The commission was approached between February 6 and 13 by members of the public .

Khumalo posted that he was planning a "Big Black Braai" at which blacks could celebrate the lives lost.

Khumalo - after mediation by the Human Rights Commission's Gauteng manager, Chantal Kisoon - said he accepted the terms of the agreement between him and the complainants.

"I acknowledge the hurt and pain that I have caused as a result of the comments made on my Facebook profile, which were made in a state of anger and disappointment," he said.

As part of his apology, Khumalo will post an update status on his Facebook page. He is also required to visit Westpark Cemetery, where many of the children were buried, and place flowers on the graves.

Khumalo is a former employee of The Daily Sun . The newspaper has undertaken to monitor his Facebook page "for a reasonable time" to ensure that he removes "all unlawful comments within a reasonable period of time".

The use of social networks, said the Human Rights Commission's Kisoon, came with responsibility.

"People should, before engaging with others on the internet, ask themselves of the consequences of their actions and ensure that they are clear about what the law expects of them."

Kisoon referred to a recent judgment in the Johannesburg High Court in which the judge commented on the harm posts on social media could have on a reputation.

The case before the judge involved an update a woman had posted in reference to a male friend.

Kisoon said there had been an increase in the number of complaints made to the commission as a result of comments made on social media.

She said racial remarks were of particular concern.

"Considering our history and where we come from, it would be very naïve to think that race issues do not affect us. We all need to work together to achieve national harmony."