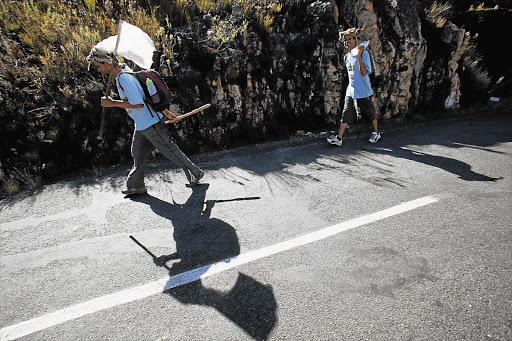 Father and son Billy and Ulrich Steenkamp walk at a fast pace up Baines Kloof. A group of bushmen walked from Mossel Bay to parliament to hand over a memorandum to the government about the lack of rights for indigenous communities
Image: SHELLEY CHRISTIANS

Their journey started - without a cent in their pockets or a morsel of food in their bags - more than 500km away in Mossel Bay on Monday last week.

Their walk coincides with the KhoiSan United Front's call on indigenous groups to unite to contest next year's elections.

Group member Lana Cavernelis said they will hand over a memorandum to the government in Cape Town demanding that it implement basic rights determined by the UN Declaration on the Rights of Indigenous Peoples. South Africa is a signatory to the 2007 declaration.

According to the UN Permanent Forum on Indigenous Issues, the declaration addresses several issues, including the right to identity, language and employment.

Cavernelis said they took a 30km detour due to a development at Pinnacle Point in Mossel Bay.

"The St Blaize caves and Pinnacle Point are heritage sites of the KhoiSan or indigenous people but the Western Cape government and other developers have plans for the area. Those are sacred sites where we perform rituals," she said.

These included Pinnacle Point. Meyer said applications have been lodged for construction there but a feasibility study was still under way.

"One cannot construct without consulting people," he said.

Stanley van der Berg, leader of the KhoiSan United Front, said there we re up to 100 indigenous groups in South Africa.

"We have called on everyone to come together because, divided, none of us will get enough votes for a seat," said Van der Berg.

Aaron Messelaar, of the Griqua royal house, said there we re an estimated 3million indigenous people in seven provinces represented by seven political parties.

"We are too divided when it comes to politics. We must grow together under an umbrella of traditional leadership," said Messelaar.

BLESSED ALL THE WAY

THE walk from Mossel Bay to Cape Town has been a spiritual journey filled with blessings for the seven activists, they say.

Most were clad in traditional wear and carried the bare essentials, including "something warm'' and Hotnots kooigoed, traditional medicine for spiritual cleansing.

One of the activists, Lana Cavernelis, said they had lived off the land, eating veld kos (food from the field) such as Hotnotsvy (wild).

On the first night, they slept under a tree in Albertinia after walking 80km from the early hours well into the night.

Then, wherever they stopped, residents of the towns opened their hearts and doors.

"We were able to make huts with grass and live on veld kos, but people would give us food and water. This we accepted because food is a blessing," said Cavernalis

They hope to be in Cape Town by Thursday.

"We have prepared for this for a long time; some have been preparing all their lives.

"We are not doing this for a specific tribe or clan. We are doing it for all indigenous people of South Africa," she said.