Taxing the public by stealth 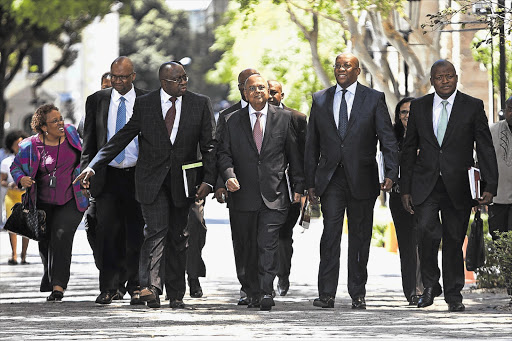 Minister of Finance Pravin Gordhan, centre, and his team arrive at parliament yesterday for his Budget presentation
Image: HALDEN KROG

Finance Minister Pravin Gordhan will crawl into your wallet, even if his latest Budget does not directly increase the personal income tax rate.

"We find ourselves in a challenging period, with revenues lower than expected by R16.3-billion compared with estimates at the time of the 2012 Budget," Gordhan told parliament yesterday.

Battle-bruised taxpayers would have been holding their collective breath as he announced that last year's budget deficit was bigger than expected and that economic growth this year would be less than forecast.

The Treasury would have to find the money somewhere and many expected Gordhan to increase the marginal tax rate for the highest-income earners to 42% from 40%. Some even feared that VAT would be increased.

Instead, Gordhan announced "personal income-tax relief of R7-billion" and a medical tax credit and adjustment of R385-million.

The reason for increasing the thresholds annually is to avoid "bracket creep", which would drop many taxpayers who receive wage and salary increases into a higher tax bracket and take a large part of their gains for the fiscus.

By adjusting the thresholds less, Gordhan has ensured that many people (earning different incomes) could now pay more tax, especially if they receive high pay increases.

The average inflation rate was 5.6% last year. So low-income earners who would not have been taxed if the adjustment kept track with inflation will now be dragged into the tax net.

By using "bracket creep" and a higher fuel levy Gordhan will silently squeeze the maximum out of existing taxpayers and consumers.

The increase of 23c a litre on the fuel levy is in addition to yet another price hike next week. After rising by 41c a litre three weeks ago, the price of petrol is to increase by more than 80c.

Whether the fuel levy will replace the need for e-tolling is not clear. But it seems unlikely as Gordhan has earmarked 8c of the increase to the Road Accident Fund.

"The effect of the proposed changes is that they will seek to collect 11% more from individuals," said Willem Oberholzer, tax partner at Grant Thornton in Pretoria.

Gordhan said economic growth was expected to be 2.7% this year. Last year he still predicted growth of 3.6% for 2013.