A slap on the wrist for wasting R1.6m 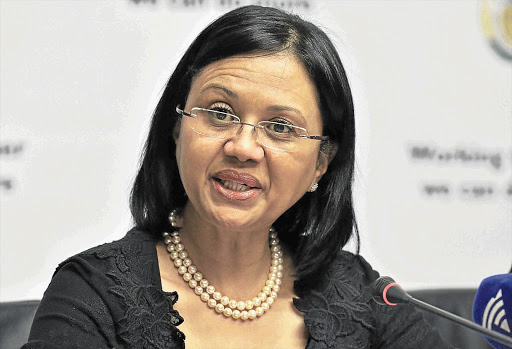 Zuma yesterday wrote to National Assembly speaker Max Sisulu informing him that he had reprimanded Joemat-Pettersson for violating the executive ethics code.

Public Protector Thuli Madonsela last year found Joemat-Pettersson guilty of breaching the code by spending more than R420000 at a Johannesburg guesthouse during the 2010 Soccer World Cup and another R151000 of taxpayers' money to fly her children from a holiday in Sweden, among other transgressions.

Zuma's reprimand of Joemat-Pettersson follows a recommendation by Madonsela that he take action against her.

"I had an opportunity to engage with Minister Joemat-Pettersson on the findings of the public protector. After careful consideration of the public protector's findings on the matter, as well as Minister Joemat-Pettersson's submission on the matter, I have reprimanded [her] for her violation of the executive ethics code," said Zuma in his letter to Sisulu.

DA MP Annette Steyn said it was "terrible" that Zuma had merely reprimanded the minister.

She said it was now up to parliament's joint ethics committee to ensure she fully repaid the money.

"It's terrible that she's just being reprimanded . According to the public protector, the minister lied about her use of public funds. I will ask that the letter be discussed by the ethics committee," Steyn said.

But Presidential spokesman Mac Maharaj insisted Zuma had dealt "sufficiently" with the matter.

"The president has acted to the recommendations filed by the public protector. We believe that is sufficient," said Maharaj.

In 2011, Zuma expelled then Cooperative Governance minister Sicelo Shiceka when a similar inquiry by the public protector concluded that he had abused public money by visiting a girlfriend serving time in a Switzerland prison.

Madonsela found that Joemat-Pettersson acted against the provisions of the ministerial handbook by spending public funds on flight tickets for her children.

The minister travelled to Sweden in December 2009 on official business but combined the trip with a family holiday.

Her spokesman, Palesa Mokomele, said the minister had started repaying the R151000 she owed but could not say how much had been paid back so far.

"She's made arrangements to pay that money ... I can't divulge how she's repaying it or whether it's being paid in full but the money is being paid ... The minister has made a commitment to comply with all the recommendations of that report," Mokomele said.

Joemat-Pettersson, who earns R2 -million a year, disclosed in the register of MPs' interests in 2011 that she received R200000 a month in child maintenance from the estate of her late husband.

She also has unlimited travel benefits from the same trust and owns a summer house and a flat in Stockholm, Sweden.