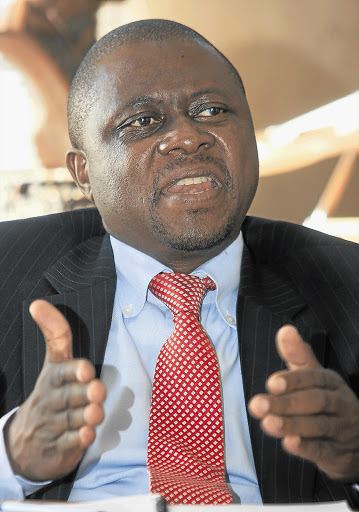 Fired South African Airways chairman Vuyisile Kona was allegedly offered R500000 by a member of the powerful Gupta family just weeks after he took up the driving seat at the airline.

Kona was invited to a meeting at the Guptas' Saxonwold, Johannesburg, home on October 29 last year by Siyabonga Mahlangu - "special counsel" and adviser to Public Enterprises Minister Malusi Gigaba.

Mahlangu, who yesterday said he "reserved his rights", confirmed introducing Kona to Sahara, a Gupta company, but denied any knowledge of the cash offer.

The Sunday Times has been told that Mahlangu sat through the 40-minute meeting during which the younger Gupta brother, Rajesh, also known as Tony, made the offer.

Also present at the meeting were a son of President Jacob Zuma, Duduzane Zuma, and Tshepiso Magashule, a son of Free State premier Ace Magashule.

Zuma could not be reached for comment. Magashule yesterday "recalled" the meeting, but denied knowledge of an offer to Kona.

He said: "No, my brother, you can't just give half a million for nothing ... is this the Lotto or what? SportStake? I remember the meeting. I was there."

The Sunday Times has spoken to several additional sources who had knowledge of the meeting.

Upon arrival at the meeting, Mahlangu introduced Kona to "our brother", Tony Gupta.

They shared a cup of Indian tea and Kona was congratulated on his appointment - at that stage he was chairman and acting CEO, following the departure of Siza Mzimela on October 8.

Then Gupta allegedly told him they were "brothers," that "times were tough" and there was R100000 available for him.

Kona asked what this was for and told Gupta that he did not need the money. Gupta allegedly upped the offer to R500000.

Kona told at least one confidante afterwards that Mahlangu had called him to a "stakeholder meeting" and that he was stunned by what transpired at the meeting.

He had asked Gupta what the money was for, said "no" and left. Several sources said Kona had been to the Gupta house only once.

Attempts to speak to Kona were unsuccessful, but it has been established that he confided in a senior board colleague, Dudu Myeni, at the time. Myeni replaced him as acting chairman on December 7.

When rumours of the meeting began to leak, Mahlangu is said to have chastised Kona for having spoken to Myeni about it.

In an SMS on November 27 he told Kona: "Uyangithengisa [you are selling me out]. Why did you let her know that u knew where she was going. U will compromise the mission."

Mahlangu, who sounded surprised when contacted by the Sunday Times on Friday, asked for questions to be e-mailed to him. Yesterday he denied being party to a meeting where any illegal activities were discussed.

In a written response, he said he received requests to facilitate meetings between business and parastatal executives in the normal course of his job.

"Any insinuation that I would ... facilitate meetings for these persons other than in the course of my work and the lawful discharge of my duties is unfounded," he writes.

"For the record, Sahara is a significant user of air travel services, which include those of SAA and other airlines. I introduced Mr Kona and Sahara to each other in that context and no other.

"The meeting took place within the context of an existing contract between SAA and Sahara cognisant of certain impending significant additional travel business that SAA could secure from Sahara in the short term, " Mahlangu writes.

He says this deal predated Kona's appointment to the board of SAA and his tenure as acting CEO. In response to a question about why he had chastised Kona, Mahlangu writes: "As a new CEO, Mr Kona routinely asked for - and received - my advice, none of which could reasonably be construed as chastisement."

A spokesman for the Gupta family, Gary Naidoo, said the Sunday Times had not given them enough time to respond and added: "The meeting was about how the various group companies could switch business from other service providers to SAA.

"Since the meeting, we have now started moving our business to SAA and this plan has not changed despite Mr Kona's departure." He said Kona later arranged meetings with other SAA executives "to take forward the discussions on our corporate travel".

"There may be some confusion in your mind around monies paid, as around R400000 was paid by one of our group companies to SAA's corporate account via our travel agent for travel services provided."

In January, the Mail &Guardian reported that Mahlangu was a key player in a controversial newspaper sale deal involving parastatals and the Gupta-owned The New Age. In that report he denied putting pressure on state-owned entities in this regard.

SAA spokesman Tlali Tlali said neither the airline nor the board would comment on the matter, pending the outcome of its investigation of Kona, because "any substantive comment on the allegations could affect the integrity of a process".

Tshwete confirmed that Kona was suspended after asking the minister to be reinstated as chairman of the board. "The minister felt his presence there would not have a good effect on the board."

Barely six months into the job, Kona was spied on, allegedly by SAA's Group Security Services. This followed claims that he was negotiating with a new union without authority to do so. He was also left red-faced when the board cancelled the contracts of consultants he had hired to help examine losses at Airchefs, a subsidiary of SAA.

Last month, the board resolved to suspend him as CEO just 24 hours after he confronted it about an allegedly altered legal document.

Gigaba, in an earlier interview, dismissed concerns about the state of parastatals under his leadership. He said SAA was the only parastatal experiencing "governance and financial problems".

"The problems at SAA are the only ones you can point to as [a] sign that the portfolio is disintegrating. The rest is rumour and gossip."

He said a new SAA CEO would be appointed at the end of the month.

The Prevention and Combating of Corruption Act makes it a crime for anyone to directly or indirectly give, agree to give or offer any other person gratification in the form of money, donations, gifts or loans to induce dishonest or biased behaviour.

A spokesman for Corruption Watch who had no knowledge of the meeting said the offer of the money was "grossly inappropriate". "If this situation is true, then under the act there is a case to answer. There is a very strong section that has actually never been prosecuted, which compels both civil servants in this instance to report this matter."

The Sunday Times previously reported that senior ANC officials had raised concern over the fact that the Gupta brothers, Atul, Ajay and Rajesh/Tony, were said to wield so much power that they often summoned cabinet ministers and senior government officials to their Saxonwold home. - Additional reporting by Sibongakonke Shoba

WHO IS SIYABONGA MAHLANGU?

SIYABONGA Mahlangu is a graduate of the University of the Witwatersrand and has worked his way through some of South Africa' s top law firms.

The son of former Mpumalanga premier Ndaweni Mahlangu, he was a director at law firm Edward Nathan Sonnenbergs until 2010. He was hired as "special counsel" to the minister of public enterprises, Malusi Gigaba in 2010.

Mahlangu represented the ANC during the oilgate saga involving a donation to the party from the late Imvume director Sandile Majali. He is said to have been earmarked for a senior post in government.