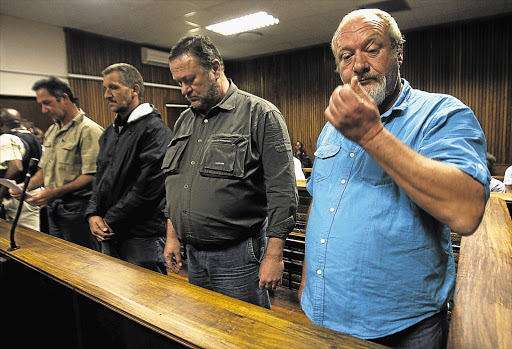 "The State requested that the matter be postponed to May 24 for further investigation," said regional spokesman Phaladi Shuping.

Hein Boonzaaier, 50, of Centurion, Martin Keevy, 47, of Bloemfontein, Johan Prinsloo, 49, of Naboomspruit, and Mark Trollip, 49, of Douglas, were in court for only a few minutes, he said.

They were arrested on December 16, 2012, the Day of Reconciliation, for allegedly planning to kill African National Congress leaders by detonating a bomb at the party's national elective conference in Bloemfontein.

In January, Trollip, Keevy, and Prinsloo were denied bail by magistrate Mziwonke Hinxa.

The magistrate held that aspects of the three men's health and other family considerations did not qualify as exceptional circumstances in their bail application.