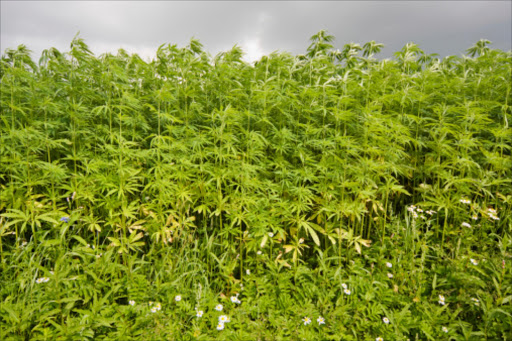 The Pretoria West township of Saulsville is "up in smoke" after dagga was discovered growing wild behind a recreation park.

News of the discovery of the dagga plantation on Sunday afternoon spread like wildfire, sparking a harvesting frenzy under the veil of darkness.

Some residents have crawled under the park fence to get at the dagga .

A 32-year-old man, who did not want to be named, pointed at two refuse bags in his bedroom, full of dagga, and said: "I am set for at least a year if I smoke alone.

"All I need now is a concealed spot where I can dry it."

The father of two has been joined in his endeavours by a friend who does not use the drug for recreation.

Nevertheless, the friend filled a 25-litre bucket with dagga, saying he has friends and relatives who enjoy the herb.

By yesterday afternoon, almost all of the dagga bushes had been claimed.

Only three remain untouched - growing in deep undergrowth and inaccessible.

More than a year ago, Tshwane metro police destroyed two dagga plantations - each the size of a rugby field and with a potential harvest worth an estimated R5-million - in Brazzaville informal settlement, near Atteridgeville.

Raymond Ndukula, who lives near the site, said it had been unusually busy in the area for the past two nights.

"I did not know why until I saw people carrying bags and I later learned that it was dagga."