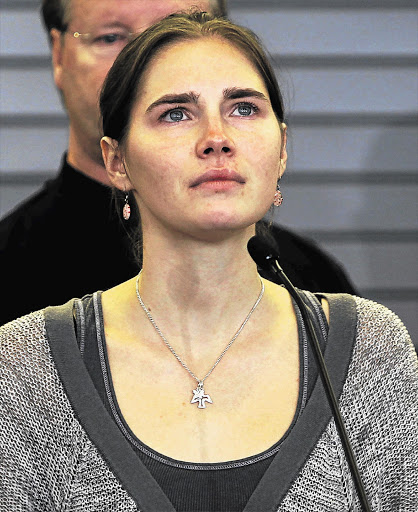 Kercher's half-naked body, with more than 40 wounds and a deep gash in the throat, was found in the flat she shared with Knox in Perugia, Italy, in 2007.

Prosecutors accused Knox and Italian Sollecito of killing the 21-year-old student at Leeds University, in the UK, during a drug-fuelled sexual assault that got out of hand.

Knox and Sollecito, who have consistently protested their innocence, were initially found guilty in 2009 and sentenced to 26 and 25 years in prison respectively. Their trial grabbed headlines around the world.

In 2011, their convictions were quashed when forensics experts challenged evidence in the original trial. This prompted accusations of a botched police investigation and left many aspects of the killing unexplained.

The pair were released after four years in prison and Knox returned to her family home, near Seattle, in the US, immediately afterwards.

Yesterday, the Court of Cassation overturned the acquittal and accepted a request by prosecutors and Kercher family lawyers for a retrial. They had criticised the earlier ruling as "contradictory and illogical".

The Italian justice system does not have a "double jeopardy" provision that would prevent a defendant being tried twice for the same offence.

The court has not set a date for the new trial, to be held in Florence.

The ruling was immediately welcomed by the Kercher family lawyer, Francesco Maresca, who said it would provide an opportunity to find out what happened to Meredith Kercher.

He criticised the earlier judgment acquitting Knox and Sollecito as "extremely superficial".

It is not known if Knox, now 25, will return to Italy for the trial but she has said the superior court's decision was "painful". The prosecution had repeatedly been exposed as "unfounded and unfair," she said.

She is due to publish a book of memoirs next month.

"She was very sad. She thought this nightmare was over," Carlo della Vedova, a member of her legal team, said after speaking to Knox.