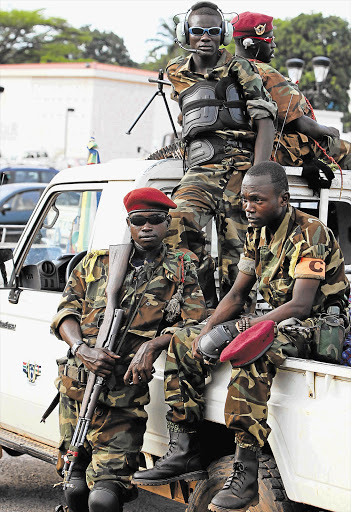 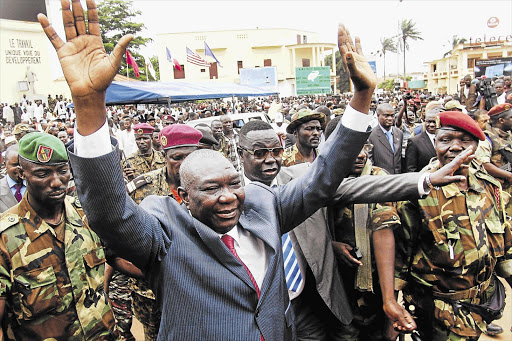 Rebel soldiers who overthrew the government of the Central African Republic are cruising the streets of the capital, Bangui, in captured South African military vehicles.

Yesterday, a group of heavily armed Seleka rebels could be seen draped over a Toyota Landcruiser marked with the insignia of Operation Vimbezela, the South African military mission in the CAR. A machine gun was mounted on the roof of the vehicle.

Witnesses reported seeing several other South African military vehicles in rebel hands, some with "Seleka" painted on them in crude lettering - a graphic indictment of a "peace mission" gone horribly wrong.

Thirteen South African soldiers lost their lives in fierce fighting just over a week ago as rebel soldiers advanced in a coup that ended in their leader Michel Djotodia being swept to power.

The mission has been widely criticised by those who believe that it was launched to protect private business interests linked to the ANC government, and to prop up the unpopular and authoritarian president, François Bozizé, who has fled the country.

The ANC released a strongly worded statement yesterday, denying it had business interests in the CAR. It accused the Mail & Guardian newspaper, which detailed the alleged links last week, of "pissing on the graves of gallant fighters who put their lives on the line in service of our country and our continent".

Despite sporadic gunfire, an uneasy calm descended on Bangui yesterday, with rebel troops thronging the streets on foot and patrolling every corner of the sweltering city in bakkies rigged with heavy machine guns and bristling with rocket-propelled grenades. Some of the rebels were clearly in their early or mid-teens.

Markets have reopened and pedestrians have ventured onto the streets again but rebels and private security guards can be seen posted outside some buildings to prevent a repeat of the earlier rampant looting.

Bangui airport remains heavily guarded by French troops. A small contingent of South African troops is at an adjacent base. The Sunday Times reported that South African soldiers were "devastated" when forced to fire on child soldiers. The national secretary of the SA National Defence Union, Pikkie Greeff, has called on coup leader Djotodia to be indicted by the International Criminal Court for using child soldiers.

On Sunday Djotodia formed a new government by decree, naming himself president and defence minister. Seleka rebels and their allies took the key ministerial posts, including mines, commerce, communications, security and public order, petroleum, and water and forestry.

Opposition leader Nicolas Tiangaye was allowed to stay on as prime minister.

The coup leader has turned the Ledger Plaza Bangui, a luxury hotel in the centre of the city, into his headquarters. Yesterday, the hotel was abuzz with a celebratory atmosphere. The lobby thronged with newly appointed cabinet ministers rubbing shoulders with businessmen seeking their favours. Outside, scores of Seleka rebels lounged around the drained swimming pool or stood next to heavily armed pick-ups, some wearing sunglasses and cowboy hats or turbans.

Rebels posted outside the headquarters of French company Areva told a manager that they were tired of being without transport and were planning to use their assault rifles to steal a car.

"I told them they would reap what they sowed and offered to buy them a motorbike if they refrained from acting like bandits," the manager said. "They agreed."

The rebel takeover has been met with mixed reactions. Some Bangui residents interviewed feared that Djotodia would simply continue the cycle of violence and patronage that has plagued this impoverished and landlocked country for decades.

"They will have to start from less than zero in developing this country. Where they will get the finance and investment from, I don't know," said a sceptical diplomat.

One business leader was more upbeat. He said he believed that Djododia was the only leader "who has the ability to develop this country - and he can count on me to help him do it".

"They are the Gula, the warriors of this country. You can count on them if you want a real army and a safe country."

He said South Africa's military intervention was tragically misguided. "You sent troops to do what? To keep in power a man who everybody hates. The foreign policy of South Africa is confused."

Others are wary of the rebels and their firepower: "Be careful. These guys are crazy," a businessman said.