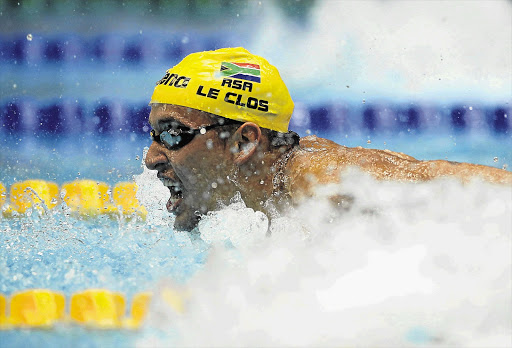 Swimming SA chief executive Shaun Adriaanse confirmed that all costs for elite swimmers to attend the Fina World Championships in Barcelona in July will be covered under Sascoc's Operation Excellence (Opex) programme.

But Adriaanse warned that the country won't achieve the same results as the London Olympics at Rio in 2016 if they don't get a sponsor to replace Telkom's R11-million a year, which ended in 2011.

"It is not [only] about the top athletes, it is the next level of athletes. We will be in trouble if we do not get the necessary support.

"If you look at the previous Olympic cycle right up to 2011, we had the support of Telkom and an allocation from the National Lotteries Distribution Trust Fund, which was R8-million a year.

"Right now the reality is we don't have a partner at the level of what we had with Telkom, and Lotto has reduced its allocation to R2-million," he said.

"That kind of support made a huge difference in terms of us being able to deliver what we did last year. Without similar kind of support, right up to 2016, the country can't seriously expect us to pull off the same kind of performances.

"We can't beg and borrow money and have lots of noise in the media every time there is a big championship. It is not sustainable. There needs to be a firm commitment from corporate South Africa in terms of how important are the Olympic Games and the participation of their brand in the Games."

The beleaguered federation is relying on Sascoc's Opex programme, which has a R100-million a year budget to assist 72 sporting codes - as well as a subsidy from world swimming governing body Fina - to be able to send swimmers to Barcelona in July.

Adriaanse said this means 85% of the costs of the swimmers who are not on the Opex programme will be covered, but the swimmers themselves will have to cover the shortfall - which amounts to about R3000 a swimmer, he said.

Sascoc president Gideon Sam said a new funding model was needed for the country's sports that don't have huge marketing pull like soccer, cricket and rugby.

"Swimming SA is one of 72 of our members and they are all in the same boat. We need to discuss a funding model for sport in this country. We will have these debates every year when teams must leave, but we are not really addressing fundamental financially supporting sport," Sam said.

"The sponsors can say: 'It is not our responsibility, it is government's responsibility and we haven't got the money'. There are competing priorities at government . Can we take R3-billion out of our fiscus and put it into sport like the Australians are doing?"