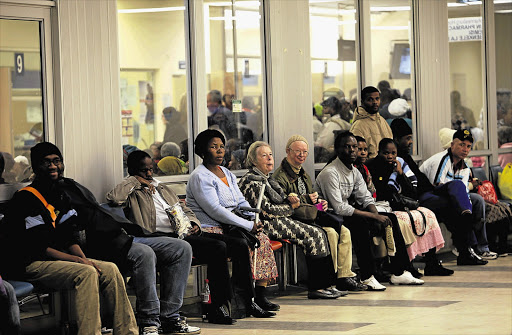 These are the problems experts say plague government healthcare and that will have to be dealt with if national health insurance is to be implemented.

The government proposals for fixing the healthcare system do not address the systemic problems, experts say, but instead suggest spending more money on health.

Their research was published in a magazine, edited by the Council for Medical Schemes, which regulates medical aid societies.

"Decision-making has been centralised and politicised, internalising inefficiencies and dramatically increasing corruption," Van den Heever said. "When the new government took over, no mechanisms were introduced to regulate performance and deepen accountability, and what measures did exist were systematically undermined."

He called for systemic changes to healthcare .

"All that has been proposed thus far is to increase taxes," Van den Heever said.

"South Africa spends more on healthcare than our peer countries and yet our health outcomes are far worse.

"In this light, a proposal to increase spending on healthcare is ill-conceived."

Spokesman for the Board of Healthcare Funders Heidi Kruger said South Africa spends "8.5% of our gross domestic product on healthcare with poor outcomes when compared to similar middle-income countries".

Ramkissoon described the public health system as "plagued by poor management, a lack of capacity and resources, and long waiting times for patients".

Not enough money and doctors to implement NHI

TO implement the National Health Insurance, mooted as a better health system funded by taxes, South Africa is short of two things: money and doctors.

Recently, the chief director for health and social development at the Treasury, Dr Mark Blecher, said though the government would spend about R122-billion on health in this financial year, South Africa would be R80-billion short if it were to implement the scheme in full.

Writing in the Council for Medical Schemes newsletter, Dr Dumisani Bomela, from the Hospital Association of Southern Africa, said for improved health, there is a need for "significantly increased numbers of doctors and nurses".

The Department of Health human resource strategy document indicates a shortage of 82962 workers, he writes. South Africa has a shortage of 48000 nurses, 4000 doctors and 7000 specialists.

Bomela has called for a change to regulations to make it legal for private institutions to train doctors.

Private-nurse training facilities are limited to one nursing student per private hospital bed. This reduces how many nurses are trained by private hospitals, with 10 times the number of nurses applying to study that can be accepted, he said.

He expressed hospitals' willingness to work with the government to roll out NHI and suggested private public partnerships where the state pays private hospitals to treat government patients, as is being done in the UK.

In response to a call for doctors to be involved in NHI, the South African Medical Association's Dr Darian van Loggerenberg said doctors would only do so if they were paid in line with their experience.

Van Loggerenberg said the recent proposed guideline tariffs to regulate doctors's fees were 5% less than what the association proposed in 2003. He said the cost of living has increased by 55% since then.

"At this unacceptably low rate it would be impossible for private doctors to contribute to NHI."

IN a paper released last week titled "National Health Insurance, the first 18 months", the Health Department explains how it is working towards ensuring that everyone has access to "appropriate, efficient and quality health services".

This is what been achieved:

"Smaller district hospitals fared the worst, with a significant proportion scoring less than 50%."

Starting this month, inspectors will revisit the poorest-performing facilities to see if improvements have been made;

About 600 general practitioners have been contracted to the government to start working in the short-staffed 11 pilot districts;

A paper on the fund is expected to be released later this year; and

"WHAT is National Health Insurance? That is a good question. Unfortunately there is no easy answer."

So writes Kate Francis, researcher at the Helen Suzman Foundation.

In the Council for Medical Schemes' latest newsletter, health experts try to get to grips with what the insurance means.

The NHI Green Paper was finalised in August 2011 .

Francis argues that the term NHI is used by the government to describe high-quality healthcare for all, regardless of their income or ability to pay.

"But how precisely this is achieved by the proposals set out in the Green Paper is unclear," writes Francis.

Health Minister Aaron Motsoaledi has repeatedly insisted that in order to roll out the NHI, public hospitals need to improve.

But the health department has not said how exactly medical aids will work after government hospitals offer top-quality healthcare. It is believed they will continue to exist.

"Some have contended that NHI is more of a political tool than an initiative for embarking on real health reform," argues Francis.

But NHI is not insurance.

Despite the misleading name, Professor Di Mcyntre of the UCT School of Public Health and Family Medicine says: "The term insurance in essence refers to the policy objective of providing financial protection against potentially high costs of healthcare rather than specific policy instruments."

To roll out NHI, Motsoaledi has proposed a list of non-negotiables: