'My living hell for being gay' 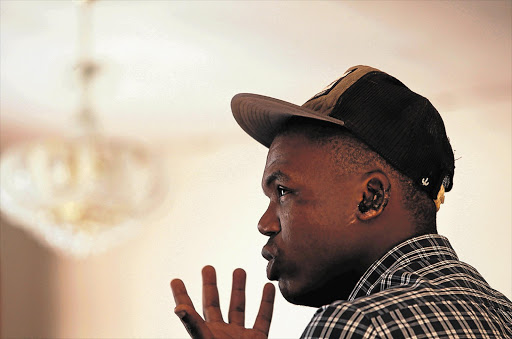 Lunga Voko, 23, was beaten unconscious and a piece of his ear shot off because he is gay. The Capetonian says his attackers were incensed that he had undergone Xhosa circumcision rites
Image: SHELLEY CHRISTIANS

They inspected his penis to see if he had been circumcised according to Xhosa tradition. And when the bloodthirsty group saw that Lunga Voko had been "to the mountain", to become a man, it enraged them.

They beat him unconscious and shot off a piece of his ear - all because he was istabane, imoffie", openly gay and living in one of Cape Town's townships.

In nearby Khayelitsha in December - after six years and 50 postponements - the men who had stabbed, beaten, clubbed and kicked Zoliswa Nkonyana to death were sentenced to 18 years in jail. Her only crime was that she was a lesbian.

"It makes me feel unsafe in my own community, and I'm frustrated because there's nothing I can do to change people's minds," said Voko.

Yesterday, the young man recounted the attack that took place on his 23rd birthday on March 31, Easter Sunday.

He had been celebrating with friends and family. At about 5.30pm he was walking home with friends when a group of men at a petrol station not far from his house swore at them.

"These guys were sticking out of the windows [of their car], calling me gay, istabane, imoffie because I was wearing my shorts, but I ignored them and we kept walking," said Voko.

In no time the car in which the men were driving pulled up in front of him and his friends, who ran away. The men were drunk.

"They got out of the car and started asking me questions like why I'm a moffie, but I wouldn't answer them. The next thing one of the guys slapped me and another attacked me with an iron rod, while the others gathered half bricks."

Voko said he had lost consciousness after he was hit on the head.

Witnesses told his family that the men had pulled his penis out of his pants to see whether he was circumcised.

"What further angered them was that I went to the mountains; I should've changed after I came back. They wanted to know how I could be gay when I'd been to the mountain as a Xhosa man."

Voko was beaten up for several minutes while on the ground. Finally, one of the men shot at him, tearing off a piece of his right ear.

Voko woke up the next day at Groote Schuur Hospital.

When he was discharged, he had tried to report the attack at the Philippi East police station, but officers blatantly refused to open a case and would not give reasons, he said.

"They came back to me only on [Wednesday], and tracked down the [suspects'] number plate through the garage's CCTV footage and managed to find the address of one of the attackers," said Voko.

Western Cape police spokesman Andre Traut said police were investigating and no arrests had been made.

"Crimes of this nature are perpetrated from time to time, but cannot be described as prevalent," he said.

Western Cape premier Helen Zille set up a commission of inquiry to probe allegations of police inefficiency in Khayelitsha, but the commission hangs in the balance as Police Minister Nathi Mthethwa is challenging its constitutionality in court.

Voko said that while growing up he had been ridiculed for being gay, but neither he nor his gay friends had been attacked before.

People stared and occasionally make a snide remark but he had never felt threatened. Until now.

Gay rights activist Mabhuti Mkhangeli, who works for the Triangle Project, said the attack on Voko again proved that gays are still not accepted in townships.

"They will say it's not normal and that culture does not permit two people of the same sex to love each other," said Mkhangeli.

Particularly homophobic were residents of Nyanga and Khayelitsha, where attacks were prevalent, he said.

"People are verbally abused, especially at night and weekends. But what happened to this young man [Voko], during daylight hours is scary," said Soldaat.