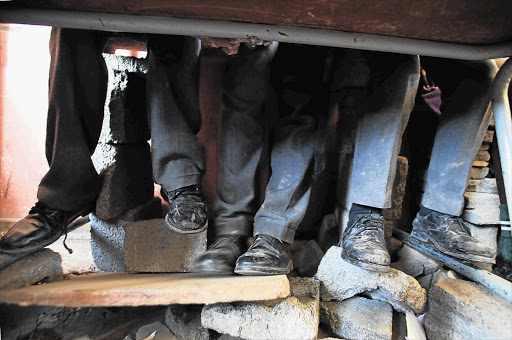 Four Mthatha pupils were arrested and charged with malicious damage to property on Thursday 16 April 2015 after they broke windows at their school and vandalised the principal’s office.
Image: SHELLEY CHRISTIANS

Some of the country's foremost academics, writers and analysts had a painful and disturbing day yesterday.

They were visiting the rural Eastern Cape to see for themselves the dire conditions in which thousands of children are being taught.

The members of the group were not prepared for what they were about to see.

According to the deputy principal of Putuma Junior, Zakile Gana, his pupils walk up to 15km to get to school.

The school needs classrooms, lots of them, said Gana. Getting more classrooms is even more important than the upgrading of the pit latrines.

Teacher Nontango Nongalo begged for space in which to teach - at the moment the children are just centimetres away from her in class. Four pupils at the back of the class have elevated their desk with cement bricks. But the bricks crumble under their weight.

For the Human Rights Commission's Mokate, it was all just too much. She broke down outside a classroom of more than 130 children. The anger and shock could be seen cutting into her face.

"I couldn't deal with it - to see children sitting like that in a class," she said.

"What disturbs me most is that this country can afford to get these children desks to sit on. That is the sad part. I think [Basic Education Minister] Angie Motshekga should come out here and see what I have seen. She would have to be moved . I don't know that anybody who has seen [this] would not sit up and do something."

But Motshekga is the target of the anger of thousands of teachers who say they have lost confidence in her and took to the streets in Gauteng and Western Cape yesterday, calling on President Jacob Zuma to fire her for having "plunged education into chaos".

Seventeen-year-old Kangela Manana had more personal concerns than the outcry for Motshekga's head. He has to leave home at 5am to walk to school. His journey takes almost two hours.

Despite the hardship, this school - hidden behind rolling hills - is the 2012 winner of the national choir award.

"We are the pride of this province," said principal Babalwa Mthumtum.

This is one reason for parents being eager to enrol their children at the school.

Then the choir took the stage - a narrow veranda. The guests were moved by the power of the singers' voices.

Archbishop Mokgoba said what he had seen was "painful and very disheartening".

"Even given these terrible conditions, there was learning happening - that was important. No textbooks but there were books and the choir was so inspiring in spite of this squalor and dangerous classrooms," said Mokgoba.

Writer Mda said it was apparent from the visit that little had changed since he was a schoolboy in Eastern Cape 50 years ago.

"It is a combination of things. There is no capacity. There is corruption at top level. [That's why] places like these are neglected.

''That makes me very, very angry," he said after visiting Sea View High School, where teaching goes on despite deplorable conditions.

The visit was part of Equal Education's campaign to force Motshekga to adopt "clear and adequate norms and standards for school infrastructure", according to the NGO's general secretary, Brad Brockman.

"This will ensure that all schools have at least the basic infrastructure needed for teaching and learning," he said.

"Education is meant to be the great equaliser.

"How are children meant to rise above poverty if these are the conditions in which they are forced to learn?

"This is a betrayal of the hope and trust which parents and citizens have put in the government," he said.