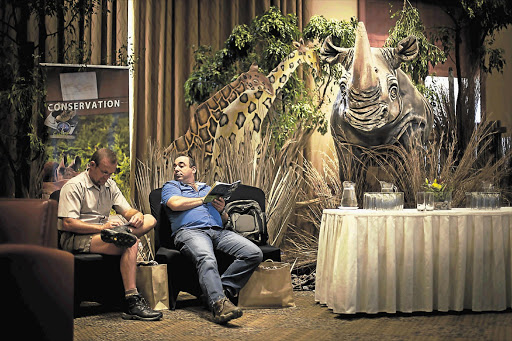 Two men compare notes as they participate in the Ezemvelo KZN Wildlife game auction at the Sibaya Casino near Durban
Image: DANIEL BORN

The biggest rhino sale in South Africa this year had the feel of a clandestine gathering yesterday as potential rhino buyers secretly made their bids - to avoid their farms being targeted by poachers.

Men in leather jackets and khaki shorts spent millions of rands to stock their game farms and private reserves with just the subtle lifting of a pinky finger or the raising of an eyebrow.

Because of the need for secrecy, several buyers - including the biggest buyer, who spent more than R5.2-million on 14 rhinos - did their bidding via cellphone.

"The person whom we bought for didn't come because he doesn't want to be identified, so we bid for him via cellphone," said a woman.

She also didn't want to identify herself, as she and her husband have lost nine rhino on their North West farm over the past two years.

Other buyers refused to even say where they were from.

"It is a sensitive issue. I don't really want to give out that information. Poaching has become terrible," said a farmer who had bought two rhino for his father.

Rahman Devduth, the natural resources trade manager for Enzemvelo Wildlife, said that the KwaZulu-Natal conservation authority has been the biggest seller of rhino in the country for years, having sold up to 100 excess animals.

Yesterday, it put 40 rhinos (and other excess animals, like nyala, giraffe, hippo and several species of antelope) on sale, netting over R13.6-million.

"The reserves have a certain carry capacity and, when this capacity is exceeded, the animals stop breeding, so we have to keep the number of animals just below that capacity," he said.

Two buyers contributed more than half of the sale amount (R7.35-million), buying 26 of the animals.

"If we can make R10-million, I would be happy," said Enzemvelo CEO Dr Bandile Mkhize

While the price of rhino horn has become worth more than its weight in gold, the prices of live rhino have plummeted in recent years as farmers have tried to get rid of the animals.

But, said one buyer, who still found the prices for the rhino too high, "the okes that have them are holding on to them".

All the buyers are vetted by the provincial and national departments of environment and have to have Cites international trade permits for the animals .

By yesterday, 313 rhino had been killed in the country this year, with 19 being poached in the Kruger National Park in the past week.