Principal told to clean up playground used as dump 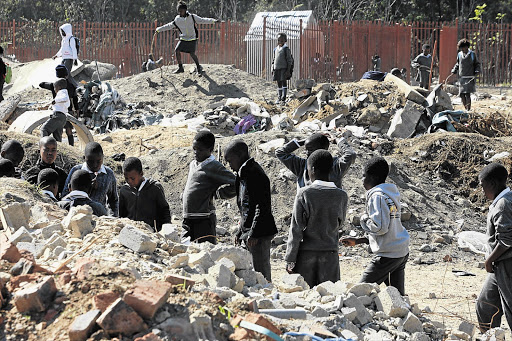 Pupils from Paradise Bend Primary School in Diepsloot at a dumping ground beside their playground. It is suspected that companies are disposing of waste in the area illegally
Image: SYDNEY SESHIBEDI

The City of Johannesburg has ordered the principal of a primary school at which half of the playground is used as a dumping site to clean up.

A municipal environmental health inspector was sent to the school yesterday after being tipped off by The Times on Wednesday.

He said the city would "institute action against the principal", including giving him a "statutory notice to clean and rehabilitate the soiled area".

Anyone found dumping in an unauthorised area faces a fine of from R300 to R1000.

Gauteng education spokes-man Charles Phahlane said the dumping site was established to create a level playing surface because there was a "ravine" running through it.

He said only rubble was to have been dumped, not waste.

"A parent offered to level the area by bringing in rubble to fill the holes, level it and place top- soil on it. There is a similar process at three other schools in the area," he said.

"The trucks have stopped bringing in rubble and a municipal grader is busy levelling the area."