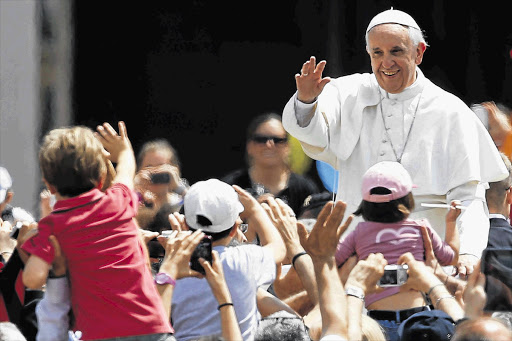 Pope Francis warned the Catholic Church to not close in on itself at a Mass to mark Pentecost yesterday.

He urged the faithful to be "open and present" in a new and changing world.

The church should ask itself daily if it were resisting new challenges and remaining "barricaded in transient structures that have lost their capacity for openness to what is new," he said.

"Newness always makes us a bit fearful because we feel more secure if we have everything under control," Francis said in a homily to a packed StPeter's Square in the Vatican, adding that change can bring fulfilment.

The Pentecost Mass marks the day on which Christians believe that the Holy Spirit descended on Jesus Christ's disciples. It is regarded as the birthday of the church.

Francis warned of the threat of a church that was "self-referential, closed in on herself", and spoke of the courage required to "take to the streets of the world" and reach "the very outskirts of existence".

Later he drove through the square, greeting cheering crowds and kissing young children. Since his election in March as the leader of the world's 1.2billion Roman Catholics, Francis has been urging church leaders to go into their communities and help the poor and suffering instead of focusing on internal politics.

Morale among the faithful has been hit by child sex-abuse scandals involving Catholic priests, and by in-fighting and careerism in the church government.

The 76-year-old pope has given clear signs that he will bring a new broom to the papacy, favouring humility and simplicity over pomp and grandeur.

He has set up an advisory board of cardinals from around the world to help him reform a Vatican administration that has been held responsible for some of the mishaps and scandals that plagued the eight-year reign of his predecessor, Benedict.

At a vigil on Saturday night, Francis said Catholics must be more courageous and seek out the people who most need help instead of dissecting theology.