Rhino rangers up their game 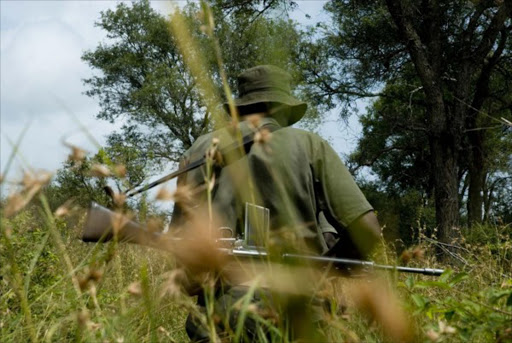 Guerrilla tactics and clandestine intelligence gathering are being used in the fight against rhino poachers in the Kruger National Park.

With AK47-wielding poachers waging an "insurgency-like war" in their hunt for rhino horns, rangers have had to adopt military-style tactics to counter the slaughter.

Lemmer said rangers are being forced to adapt to fight the scourge as up to 60 heavily armed groups of poachers enter the park every full moon .

No longer just guides and conservationists, rangers are being intensively trained in counter-insurgency warfare.

Trained to track, ambush, gather intelligence and wage counter-assault operations, the rangers are being taught the arts of war.

Lemmer said the dangers of fighting poachers were huge.

"The rangers put their lives at risk."

He said so dangerous were poachers that rangers were undergoing paramilitary training to enable them to survive.

"The poachers are not stupid," said Lemmer. "[Many of them] are highly trained, having fought in many wars."

With honorary rangers raising the much-needed funds to fight poachers, the park's rangers are being equipped with state-of-the-art paramilitary equipment.

The rangers, whose needs continuously change as poachers adapt and modernise their tactics, are equipped by their honorary counterparts with specialised GPS tracking units, camouflage clothing, vehicles, radio equipment and sniffer dogs. The dogs are used to find the poachers' routes into and out of the reserve.

Lemmer said that, given the rate of rhino slaughter, the public was under the perception that nothing was being done to stop the mass killing.

"They do not realise how many resources are being used to reduce poaching."

A Kruger park ranger who asked not to be named said: "If we were not fighting this war, there would be no rhino left."

The Environmental Affairs Department reported that more than 313 rhino have been poached this year, 229 in the Kruger National Park. It reports that 98 poachers have been arrested, 48 of them in the Kruger Park.

SA National Parks spokesman Ike Phaahla said: "The last thing you need is for rangers to be frustrated by lack of equipment to fight this war. There is a constant need to update equipment as syndicates keep putting more resources into their illegal trade with their tactics continuously changing."

Extra rangers had been hired to fight poaching but more soldiers are needed to join the fight, Phaahla said.

Hundreds of defence force men, including Special Forces, are currently deployed in the park to stop poachers who cross the Mozambican border into South Africa.

Phaahla said Jooste was coordinating the park's armed forces and strategies in the "insurgency war".