Africa gives AU many grey hairs on its 50th 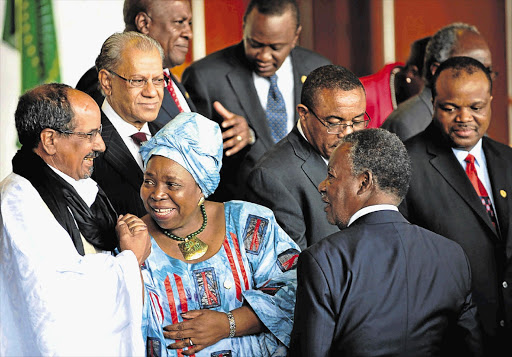 AU leaders met yesterday to tackle ongoing conflicts on the continent, a day after the pan-African bloc held a lavish party to celebrate 50 years of existence.

Long-running unrest in eastern Democratic Republic of Congo dominated the start of the two-day AU meeting as leaders from the Great Lakes region met for the first time since signing an agreement in February aimed at restoring peace in the region.

"A lot of progress has been made. I think we will be able to fix it, the Congo is going to be fixed," Tanzanian President Jakaya Kikwete said on the sidelines of the main summit at AU headquarters in the Ethiopian capital.

Tanzania is sending 1280 troops to join a new UN brigade with a mandate to conduct "targeted offensive operations" against rebels.

South Africa is to weigh in with 1000 troops of its own, and Malawi will also contribute to the force.

But UN chief Ban Ki-moon was more hesitant, saying promises on paper must be enacted on the ground.

"We will need the test of implementation," said Ban.

Leaders were also discussing a proposal to urge the International Criminal Court to back off on its bid to put Kenya's President Uhuru Kenyatta and vice-president William Ruto on trial for crimes against humanity related to the bloody 2007 election.

The proposal calls on the court to have the trial conducted in the accused's home country.

The proposal would have no legal impact on court proceedings if passed, but would significantly boost Kenyatta's standing on the continent.

Diplomats said members were divided on the proposal.

The proposal, if passed, would be the first time the pan-African body has moved formally against the court.

Kenyatta is the second African leader to face trial after genocide charges were brought against Sudanese President Omar al-Bashir.

Amnesty International has urged leaders to throw out the proposal, labelling it a "worrying attempt by the Kenyan authorities to avoid justice".

The rights group called on the 34 AU members who have signed the court's founding Rome Statute - including Kenya - to "protect the international justice mechanism they have committed to".

Mali is also expected to be discussed at the summit.

It is about to receive a UN peacekeeping force to support French soldiers who have been fighting Islamist rebels in the country's desert north since January.

Somalia, where an AU force is also battling Islamist insurgents, was another point of concern, especially the thorny issue of a breakaway southern region, which threatens to create rifts between the central government in Mogadishu and neighbouring Kenya and Ethiopia, both with troops inside the country.