'We are more than Madiba' 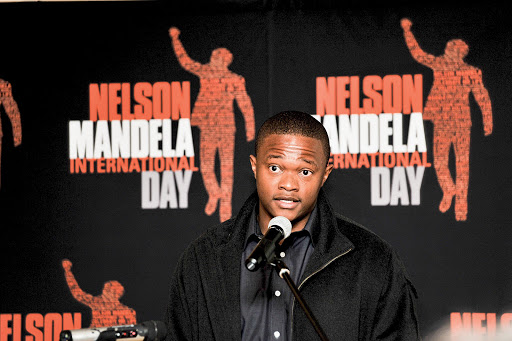 Nelson Mandela's grandson Luvuyo Mandela at the one month countdown to Mandela Day and launch of the Madiba birthday song at the Nelson Mandela Centre of Memory on June 18, 2012 in Johannesburg South Africa.
Image: Lerato Maduna

Luvuyo Mandela, when accepting the City of Paris Citizenship of Honour award on behalf of his great-grandfather Nelson Mandela, warned that there was a danger of "losing who we are" if South Africans clung onto Mandela's identity.

Following his brief speech at an event held at the Salon des Arcades, within the city's administration building, the hôtel de ville, Luvuyo spoke to The Times about the pressures of guarding the world-famous Mandela name.

"It's surreal because, for a lot of those people, it's their only opportunity to get close to the person they admire," he said.

"When I see that, I know it has absolutely nothing to do with me, because it doesn't happen to me on a daily basis when I walk through Johannesburg and do whatever it is that I have to do."

Luvuyo is the grandson of Thembekile, Madiba's son from his first marriage to Evelyn Mase.

He continued: "It's a chicken and egg thing, yeah? He didn't come from nowhere.

"And that is part of the Apartheid Museum - it shows he comes from a history of the Tembu clans. The Mandela comes last.

"It is understanding and constantly reminding yourself that our legacy doesn't necessarily start with him. He just happened to put it on an international platform."

As he spoke, people told anecdotes about where they were when Mandela was released from Robben Island. Others asked him to give their regards to his internationally famous relative.

One woman asked Luvuyo if he would pass on some music to Madiba.

Luvuyo seemed keen to cool the adulation, saying: 'The moment we hold on and cling for dear life [to] his particular, specific identity is the moment we start losing who we are as a greater people and a family."

"How is Madiba doing?

"He's 95. That's how he's doing," he said, adding that the family normally gets together on Sundays or every other Sunday for lunch.

The French Season in South Africa ran between July 12 and November 17 .

Ndlovu's trip to Paris is courtesy of the National Arts Council