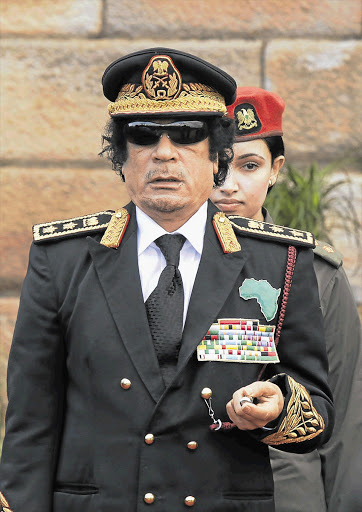 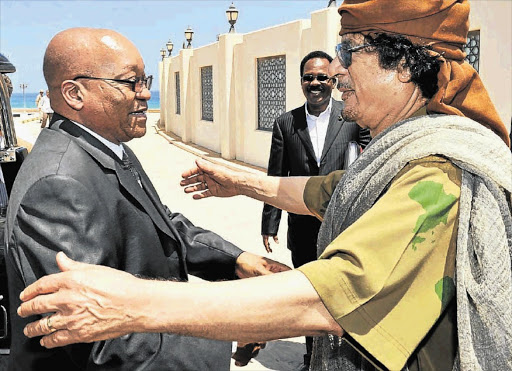 The hunt for slain Libyan dictator Muammar Gaddafi's missing billions has moved to South Africa, where a fortune in cash, gold and diamonds is believed to be stashed.

The Sunday Times has established that Libyan investigators have already met top government officials to discuss locating, securing and repatriating the loot brought here by Gaddafi and his children.

The investigators believe there is evidence of more than $1-billion in cash, gold and diamonds being held by four banks and two security companies in South Africa.

It could be the largest haul of Libyan assets found until now, although it is only a fraction of the estimated $80-billion of Gaddafi's foreign assets.

It has been established that the Libyans:

A follow-up letter sent by ANC head of security Tito Maleka on April 23 confirms that the visit "with our president in Nkandla" is an indication that "the South African government is prepared to cooperate" in "identifying all assets belonging to the Libyan people".

Marghani confirmed this week that the Libyan investigators had met Zuma and Gordhan.

Zuma's spokesman Mac Maharaj said that Zuma "was approached by a group saying they represented the Libyan government. They were referred to the National Treasury".

Gordhan's spokesman, Jabulani Sikhakhane, also confirmed that the National Treasury was approached by the group.

"The process of verifying the group's claim is under way," said Sikhakhane.

The National Prosecuting Authority, parent body of the Asset Forfeiture Unit, said it was "not in a position to comment at the moment".

Some of the information investigators are using to trace the funds is understood to have come from Libya's former intelligence chief, Abdullah al-Senussi, who was arrested in March 2012 for crimes against humanity. He is in jail in Libya awaiting trial.

The Libyan investigators declined to be interviewed. But Marghani said they had "been appointed to investigate and secure assets in Africa on behalf of the people of Libya".

This is confirmed by letters from Libya's justice and finance ministers to their South African counterparts. The letters ask for cooperation in tracing and securing "all funds and assets that have been illegally possessed, obtained, looted, deposited or hidden in South Africa and neighbouring countries by the late Muammar Gaddafi, his wives, his sons, his daughters and other relatives, close associates, private and government [or] business persons in Africa".

The letters say that the Libyan investigators have "uncovered large funds and assets in South Africa and neighbouring states".

Correspondence with government, bank and ANC officials, minutes of meetings and a lawyer's letter reveal that the Libyan investigators' hunt in South Africa began in November 2012. According to the documents, one bank account, which the investigators claim was traced through cheque stubs found in Libya, is registered in the name of Gaddafi's uncle, Abdulhafid Ahmed el-Gaddafi, a former Libyan army general.

They are convinced that part of the loot in South Africa is held by Gaddafi's former chief of staff, Bashir Saleh, known as "Gaddafi's banker".

Saleh, who also goes by the name of Bashir al Shrkawi, is on Interpol's wanted list. Despite this, he was reportedly seen hobnobbing with ANC notables at the party's centenary dinner in Mangaung in January 2012 and at the Brics summit in Durban in March this year.

Although his whereabouts are unknown, Libyan sources said he was spotted at the Michelangelo hotel in Sandton three weeks ago. He is believed to be travelling between South Africa, Swaziland and Niger.

Mzobe said he was present when the Libyan investigators met Zuma and Gordhan. But he claimed it was "not a meeting - they just greeted him [Zuma]".

"The president said they must talk to Pravin and I just took them to Pravin, who was clear that this was a matter between two governments," said Mzobe. "That was the end of my involvement."