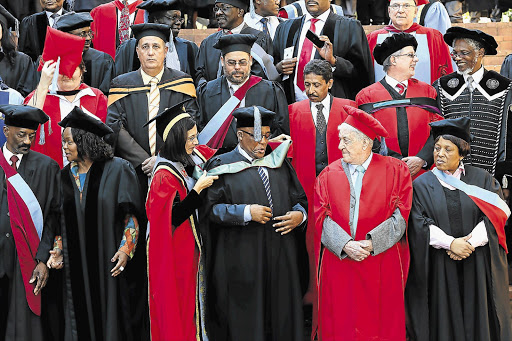 Health Minister Aaron Motsoaledi at the graduation at the University of Pretoria yesterday of 62 medical students in the South Africa-Cuba medical training programme. The programme has produced 366 doctors since its inception in 1995
Image: ALON SKUY

A 60-year-old man spent 156 days on a hospital ventilator at a cost to the Discovery Health Medical Scheme of more than R3.5-million.

A 70-year-old patient's use of assisted-breathing machines cost the scheme R3.2-million for 118 days of treatment.

About 10% of the members of medical aid schemes account for half of the schemes' annual costs, according to Discovery.

Ventilation is one of the highest costs to medical aids. Other high costs include those for the treatment of heart problems, for cancer drugs, for intensive care for infants, and for Caesarian sections.

A growing concern is that the number of people that cost schemes R500000 or more has grown.

"There was a steep increase in the number of high-cost patients, which [adversely affects] the scheme's ability to keep contribution increases to a minimum."

Six of the 70000 people on Resolution Health's books have claimed more than R500000 this year, according to principal officer Mark Arnold.

Because only a few members use most of the benefits, the young and healthy often feel that medical aids offer poor value for money.

"Medical aids are poorly understood. They are an insurance scheme [against incurring] huge costs."

Healthy members subsidise the elderly and the sick.

A study by Econex, a research consultancy, last year showed increased use of hospitals was leading to rising medical costs.

South Africa has a huge disease burden - the highest number of people living with HIV in the world, and a growing number of people with lifestyle diseases such as heart disease, stroke and diabetes, said Anderson.

The biggest costs to medical aids are:

Heart and lung transplants cost on average R1.7-million a patient.

Long-term ventilation, which cost an average of R641670

In March, Caesarian sections were the most common reason for hospital admissions of Discovery members - 2797

CHRONIC CONDITIONS MOST PAID OUT FOR:

20327 have bipolar mood disorder or other psychiatric condition;

2334 have chronic renal failure; and