Is Froome too good to be true? 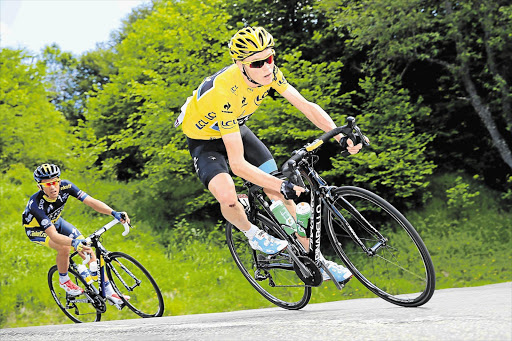 Chris Froome of Team Sky assumed control of the 100th Tour de France as it entered the mountains for the first time this weekend.

He now wears a yellow jersey which sadly doubles as a magnet for scepticism, tarnished after having been worn by a steady "peloton" of known and suspected dopers.

The 2013 Tour is the first since the most dramatic doping case to date - Lance Armstrong's. The seven-time champion was sanctioned last year after a lengthy investigation found overwhelming evidence of systematic doping within his teams.

The sad state of the sport is highlighted by the fact that his titles could not even be handed to anyone else, because everyone from that era who challenged the Texan has either admitted to doping, or been banned for doping themselves.

This year's tour thus finds itself in a very similar situation to that of 1999. Then, the Festina scandal of 1998 plunged cycling into turmoil after a team's masseuse was found transporting a car full of drugs across the border into France immediately before the race.

The tour needed a "saviour", and it arrived in the form of Lance Armstrong, a cancer survivor, in 1999. It's a story that did not turn out well, and so many within the sport are already regarding Froome and Sky's dominance - they won last year's tour with Bradley Wiggins - with a level of suspicion that says: "We've seen this story before." Few would dispute that doping was pervasive in the 1990s and 2000s.

What is in question is the current situation. Cycling has, since 2008, been the target of a more stringent testing method known as the biological passport - it tracks cyclist's blood values over time, making it much more difficult to dope without detection. Media, sponsor and fan pressure has also forced teams into so-called "zero tolerance" policies on doping.

Now, given that doping improves performances significantly - with some recent studies suggesting a 5% improvement with one of the most widely used drugs, EPO - it seems reasonable to come up with a scientific hypothesis of sorts around the Tour de France.

That hypothesis is that the tour should, in the absence of doping (assuming the biological passport is working), be significantly slower than in years gone by.

Early results were promising. The tour frequently visits the same mountains, and so historical comparisons are possible. They showed that from 2009, the typical performance in the tour dropped by between 5% and 10%. The power outputs produced by the best cyclists in the world were significantly lower than in years gone by.

So "slow" were the tours that the champions from 2010 to 2012 would have barely made the top 10 in the 1990s and 2000s. The physiological implications of this are significant, because cycling is a relatively "closed" sport, in that a rider's performance capacity is the function of measurable physiology.

And the performances of the Armstrong era, to be frank, were "alien" to exercise physiologists - defying belief. The performances we've seen since 2009 are much more reasonable, and invited a message of qualified hope for the sport.

This said, the paradigm of "guilt by performance" should also be strongly discouraged, because so many factors influence a performance - wind, tactics, race situation and the models used to estimate a rider's power output all make definitive conclusions difficult. It would be a misapplication of science to say that a rider must be doping because of unrealistic performances. This past weekend, Froome produced a ride comparable to those of the 2000s, and the world, rightly, paid attention.

Is Froome doping? We don't know, but his performance is not going to provide that proof. It raises uncomfortable questions, certainly, and cycling needs those. For now, we must wait and see how the race unfolds - encouraging scrutiny and better testing, not witch-hunts - to eradicate the doping problem.