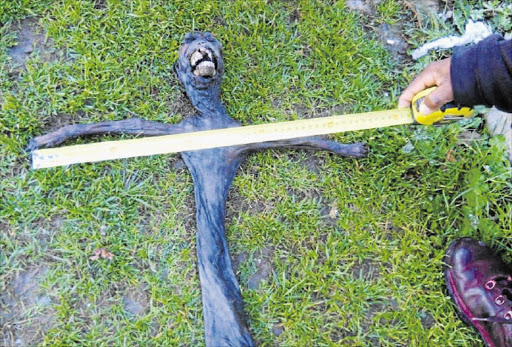 Some said the strange, elongated creature found at The Crags, just outside Plettenberg Bay yesterday, was an alien, others a donkey or a tokoloshe.

Some mockingly described it as a Die Antwood groupie or an axed cabinet minister.

By lunch time even a German newspaper had called the local authorities to confirm news of a "half man, half monkey" being found in South Africa.

On Facebook, some users urged speculators to "calm down, it's just a tokoloshe".

Dr Magdalena Braum, of The Crags Veterinary Clinic, didn't flinch when the creature was placed before her for an autopsy.

It was found by a tourist at a nature reserve and given to SA National Parks officials.

"What I saw is not uncommon," Braum said.

She said the creature had died from being bitten in the head and that its body was elongated because its grieving mother had carried it for weeks after its death.

She said that if the body had not been elongated it would have been identified immediately.

"Anyone could see it was baby baboon," she said.