THE BIG READ: March of the Zombie 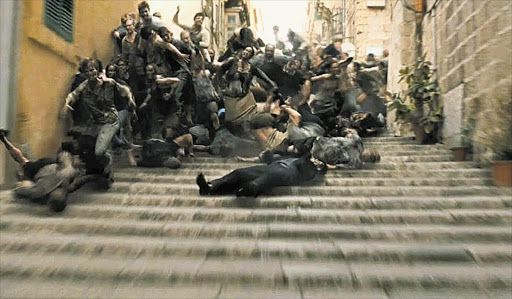 'World War Z', which opens on Friday, has a long pedigree
Image: FILMOFILIA.COM

Welcome to the zombie apocalypse, starring Brad Pitt. "We've lost the East Coast. Moscow's still dark. Life as we know it will come to an end in 90 days."

After rewrites and reshoots and overruns and Vanity Fair exposés, Marc Forster's World War Z, an adaptation of Max Brooks's bestselling 2006 novel, World War Z: An Oral History of the Zombie War, is set to invade cinemas across the globe.

Zombies were once confined to geek pursuits: horror videos, computer games and comic books. But not any more. They had already stormed the mainstream when, in 2009, Time magazine dubbed them the "Official Monster of the Recession" and knockabout romps like Zombieland played to audiences who would never have dreamt of going to see a horror film back in 1983.

Now they're on prime-time television, in the form of the American drama The Walking Dead, the British In the Flesh and Les Revenants, a creepy French spin-off from a 2004 film of the same name.

Wikipedia lists 54 zombie films released in 2012; among them Warm Bodies (a rom-com in which the male love interest is a zombie), Abraham Lincoln vs Zombies (not to be confused with Abraham Lincoln: Vampire Hunter), and the endearingly stupid Rise of the Zombies. Pride and Prejudice and Zombies, adapted from Seth Grahame-Smith's bestselling mash-up, is in pre-production.

Zombie walks, in which people dress up and stagger around, are now part of the charity fundraising landscape. Last month, The Economist ran an article titled "Zombies at the Gates" in which it identified one of the problems of the downturn as "zombie firms". The latest issue of Philosophy Now magazine addresses such topics as "Is it wrong to kill a zombie merely because it will otherwise eat your flesh?" and "Do zombies dream of a meaning of life?"

In George A Romero's 1978 horror classic Dawn of the Dead, a human survivor looks at zombies lurching around an out-of-town shopping mall, and asks, "What are they doing? Why do they come here?" To which a fellow survivor replies: "It's a kind of instinct, memory. What they used to do. This was an important place in their lives."

Nowadays, it seems, the zombies are more interested in buying sneakers and cellphones than in eating people's brains. Sears, Toshiba, Honda, FedEx, Converse, Toyota, Axe, Vodacom and the American Centre for Disease Control have all used zombies in publicity campaigns. It's as though the satirical subtext of Romero's film has taken over.

The word "zombie" is thought to have its roots in nzambi, a Congolese word for god, and zombies have their origins in the West African religion of vodun or vodou, which migrated with enslaved Africans to the Caribbean, where the term was used to describe someone put into a trance-like state by a combination of neurotoxin and hallucinogen.

Zombies were mentioned in The Magic Island, a 1929 travelogue by William Seabrook, an American occultist and explorer who had known Aleister Crowley, and tasted human flesh ("the steak was slightly tougher than prime veal").

The first full-length zombie film, unofficially based on Seabrook's book, was Victor Halperin's White Zombie (1932), in which Béla Lugosi plays a Haitian voodoo master who staffs his sugar cane mill with zombies, and uses a potion to force a young American bride to do his bidding.

A decade later, for Val Lewton's eerie 1943 production of I Walked with a Zombie, directed by Jacques Tourneur, screenwriters Curt Siodmak and Ardel Wray updated the plot of Jane Eyre and transposed it to the West Indies.

In the 1960s, zombies were still being exploited as cheap labour, this time in Cornish tin mines, in Hammer's Plague of the Zombies (1966), celebrated for its creepy dream sequence of the living dead rising out of their crumbling graves.

But it was Romero's Night of the Living Dead that rewrote the rules and laid the foundations for all the zombie films that have been made since.

Cobbled together for an estimated $114000 (you could make 1754 Night of the Living Deads on a World War Z budget) Romero's black-and-white shocker features a small bunch of people besieged in an isolated farmhouse by the living dead, who attack and eat anyone they can get their hands on. They move slowly, but they are legion; they keep on coming, an implacable force of nature.

The z-word is never used, and beyond passing mention of a crashed satellite, no explanation is given for the reanimated corpses. But we learn how they can be destroyed. "If you have a gun, shoot 'em in the head," says a sheriff leading a posse of zombie killers in a search-and-destroy mission that reminded some viewers of the US military presence in Vietnam. "That's a sure way to kill 'em. If you don't, get yourself a club or a torch. Beat 'em or burn 'em. They go up pretty easy."

Romero's film delivered the coup de grâce to the sort of traditional horror movies set comfortably in the past, which invariably ended with evil destroyed and the status quo restored.

On its initial release in 1968, Night of the Living Dead passed virtually unnoticed by the mainstream media, but its reputation gradually spread by word of mouth, the film's take-no-prisoners approach striking a chord with audiences unsettled by social revolt and political upheaval.

But it wasn't until 1978, when Romero elaborated on histhemes in Dawn of the Dead, that the zombie floodgates opened. Italian horror maestro Lucio Fulci led his countrymen with a clutch of zombie splatterfests, including two unofficial sequels to Dawn of the Dead.

As zombies have proliferated, the ground rules established in Night of the Living Dead have pretty much remained intact - with one exception. In 2002, Danny Boyle's 28 Days Later replaced Romero's shambling hordes with zombies who sprinted like Usain Bolt - and incidentally triggered much pointless fanboy bickering about whether they should be classed as zombies at all, since technically they're not dead but infected by a virus.

While the vampire is the aristocrat of the undead, zombies are the proletariat - faceless, shambolic masses that embody so many of our modern fears.

They're metaphors for poverty, immigration or disease of the week - anything that threatens to upset our well-ordered lives. They represent any segment of society that can be depersonalised for social or political reasons. Once upon a time they were a symbol of the dreaded underclass, though the recession is a reminder that many of us are now only a payslip away from being relegated to that same underclass. The zombies used to be "them", but nowadays they're as likely to be "us". - © The Daily Telegraph