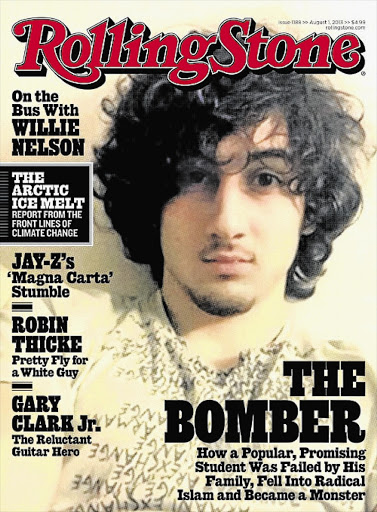 The cover that caused all the trouble on Facebook this week
Image: ROLLING STONE

Dzhokhar Tsarnaev has been featured on the front cover of Rolling Stone magazine, sparking an outcry.

The magazine was accused of glamorising terrorists by outraged online commentators, who deluged the Rolling Stone Facebook page with complaints that the cover was "tasteless" and "offensive".

The photograph of the bomber is one that Tsarnaev himself posted online and has been widely published in the media.

Under the magazine's famous masthead, with his tousled hair and unflinching gaze at the camera, the soft-focus cover shot of the 19-year-old portrays him more like a rock star than a terrorist.

On Twitter people have said the picture of Tsarnaev looks similar to an old cover featuring Jim Morrison of The Doors.

"This cover makes him look like some kind of cool rock god ... it's horrible," said a commentary on the magazine's Facebook feed.

More than 5000 people have commented on Facebook since the magazine cover was revealed on Tuesday night. Many said they were cancelling their subscription or would never buy the magazine again.

One man wrote: "Jeff Bauman, who lost both legs, should be on the cover."

Another said: "As a longtime resident of Boston, and someone who worked for years in both the music business and for one of the two major newspapers here, I have to ask you, what is wrong with your editor? Why on earth would you put this scumbag on the cover?"

The article in the magazine is headlined: "The Bomber: How a popular, promising student was failed by his family, fell into radical Islam and became a monster".

Journalist Janet Reitman spent two months interviewing Tsarnaev's friends and family. In her Rolling Stone article, she claims that the mother of Dzhokhar and Tamerlan - the latter was killed in the shootout after the bombing - pushed her sons towards Islam.

"Zubeidat believed that religion would be the cure for her son's inner demons and growing mental instability and pushed him deeper into Islam," she writes.

Referring to Dzhokhar as Jahar - the name his friends used - she writes: "Jahar shared few details of his troubled home life with even his closest friends.

"In the months leading up to the bombing, his family had disintegrated. His parents were both living in Russia. His two older sisters were estranged.

"Only Tamerlan, who was becoming increasingly devout and judgmental of all non-Muslims, was still in Boston. When one of Jahar's friends asked to meet Tamerlan, Jahar said, 'No, you don't want to meet him'."

Tsarnaev, who is in a federal prison in Massachusetts, pleaded not guilty last week to 30 counts related to the bombing.

He faces 17 charges that carry the death penalty. Prosecutors have not said whether they will seek capital punishment.