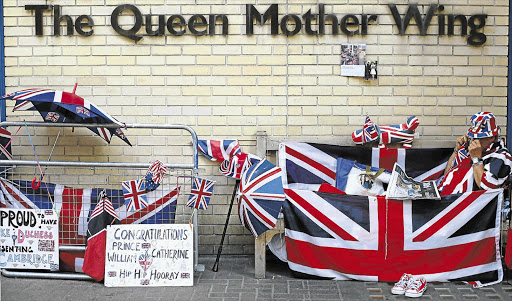 A monarchy fan camping outside St Mary's Hospital, London, where Britain's Catherine, Duchess of Cambridge, is due to give birth 'at any moment now'
Image: SUZANNE PLUNKETT/REUTERS

Covered head to toe in Union Jack paraphernalia, Terry Hutt has been camping on a bench outside St Mary's Hospital for more than a week.

The 79-year-old retired carpenter from Cambridge is "more than excited" about the imminent birth of the third in line to the British throne.

He is one of many well-wishers - Britons and visitors from all over the world - outside the west London hospital at which Prince William's wife, Kate Middleton, is due to give birth any day now.

More than 100 journalists have been waiting at the private hospital for the birth since the beginning of the month, but Hutt is one of only a few monarchists who show the same patience.

Known to some as "The Umbrella Man", he has appropriated a bench on the pavement opposite the entrance to the maternity wing of the hospital and decorated it with Union flags.

Hutt, who has been an avid royalist all his life, wears a Union Jack umbrella hat.

He hopes to present a card to Kate and William after their baby is born.

"I know that William will be so proud. I am sure he will walk through that door 10-foot tall," Hutt said.

Would he prefer a girl or boy royal baby?

"I want a healthy baby. But if it's a girl I hope they name her after my granddaughter - Amber."

The chances of "Amber" being chosen are very slim.

John Loughrey, another monarchist waiting at the hospital, is hoping desperately for a girl. Clutching a baby-girl doll, he said he was sure Prince William wants a girl and that he would call her Elizabeth Diana.