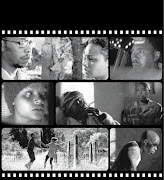 ILLEGAL: Stills from 'Of Good Report', which stars Mothusi Magano as a teacher who falls for one of his 16-year-old pupils, played by Petronella Tshuma, 23

A South African movie about a schoolteacher who falls for a student has become the first film to be banned since 1994.

The film "Of Good Report" was the first not to receive classification since the Film and Publication Board was created, Sunday Times reported.

According to the newspaper, the decision was made based on the depiction of a simulated sexual act involving the 16-year-old student, who was played by a 23-year-old actress.

Board spokesman Prince Mlimandlela Ndamase reportedly told the Sunday Times the film was banned because it contained "content that carries an illegal act in it".

"We need to emphasise that, ordinarily, we would not refuse the right of viewers to see the content, but in the interests of the protection of the child and our laws that exist in the country, child pornography is one of these things that are not legally permissible in the country."

The film's producer, lawyer Michael Auret, had reportedly lodged an appeal against the board's ruling.