Germans do it with clothes off 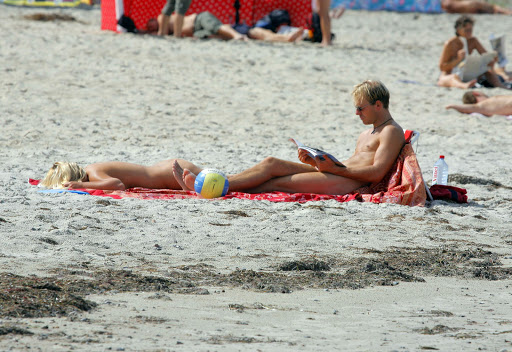 A couple sunbathes at Warnemuende nude beach in Rostock, Germany, Saturday, August 19, 2006. As many as 12 million Germans, who go to nude beaches at least once a year, according to Wolfgang Weinreich, the head of the International Naturist Federation, may think the same as it is becoming increasingly difficult to find a nude, or so-called FKK, beach. More than a third of them in the former East have disappeared since German reunification in 1990, said Horst Barthel, deputy head of the DFK German Naturism Federation in East Germany.
Image: Jochen Eckel/Bloomberg via Getty Images

German holidaymakers are the most likely to sunbathe nude, a poll has claimed, whereas the French are the most supportive of Speedos.

The annual report by Expedia, the holiday booking website, exposes the Germans as the most likely to go au naturel, with about 17% confessing to going nude on the beach on at least once occasion. That figure compares to the global average of 7%.

The Danes showed a similar level of confidence, according to the study, with 40% of the country's women happy to sunbathe topless, and the same number stating they were happy to see images of themselves in swimwear on social media sites.

Least likely to sunbathe topless were Japanese and Malaysian women.

The French were found to be the nation most likely to approve of men wearing Speedos. More than 90% of the country's beachgoers said they were acceptable beach attire. Most likely to wear the garment, however, were Brazilians: 22% said they regularly don a pair.

Indians were found to be the most likely to spend their time building sandcastles.