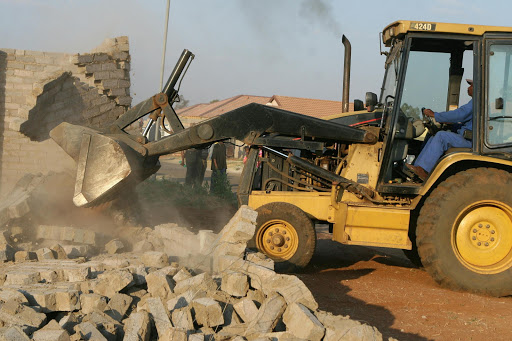 A catapillar at work during a structural demolition by the Department of Housing. File picture.
Image: Bafana Mahlangu/ Sowetan

A conspiracy is behind charges against an official accused of selling state-owned land to Lenasia residents, the Johannesburg Magistrate's Court heard.

Moleke Matsepe said in his closing argument that the State had failed to prove its case against his client, Sifiso Handsome Litau, beyond a reasonable doubt.

In November, the Gauteng housing department demolished about 50 houses illegally built on government land in Lenasia.

The buyers were given forged deeds of sale with the department's logo. Seven people, including Litau, were allegedly implicated in the illegal land sales.

Matsepe said the houses belonging to the State's witnesses were not demolished. Only one wall on the property of one witness was apparently taken down.

Matsepe asked: "Why, if all the houses have to be demolished, why were the complainants' houses not demolished? That's where the conspiracy comes in."

Their evidence indicated that Litau presented himself as an agent of the housing department. One of the witnesses testified that she met Litau outside the department's offices.

Greyvenstein argued that one of the witnesses had denied a defence claim that she was in a relationship with Litau two years before the case.

"It would not take two years [for the witness to make up the allegation] if there was a grudge," Greyvenstein said.

He told the court the "receipts" issued to the buyers had not named Litau, but that he would have been named had there been a conspiracy.

The receipts for the money paid, allegedly to Litau, were also all similar, indicating they came from the same person.

Greyvenstein rejected the conspiracy claims and argued that Litau should be found guilty.

In his closing statement, Matsepe said experts should have been called to verify whether the writing on documents relating to the illegal land sales matched Litau's.

As such, the State had not used all the resources at its disposal and thus the evidence before the court was largely speculation, he said.

Matsepe asked why the State had not called a witness from the Registrar of Deeds to prove the property transfer documents were not valid.

Magistrate Theunis Carstens asked him whether he had ever come across a valid legal document where all the text was in English, except for one paragraph, which was Afrikaans.

Matsepe persisted that an expert witness should have been called. Carstens said this was not necessary because "we all have what is called common sense".

Matsepe responded: "I will use my common sense, if you don't want to use yours".

He insisted that the State had failed in its investigation and had failed to prove Litau's guilt beyond reasonable doubt.

Carstens postponed the matter to September 3 for judgment.