'Peacocking' is in our genes 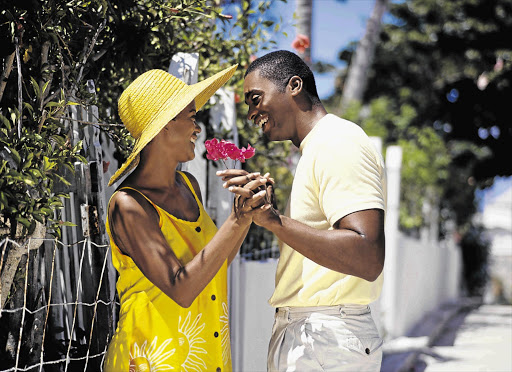 Scratch a red-blooded male near a pretty woman and you find not a mass of testosterone, but a calculating machine.
Image: THINKSTOCK

The news that men are more likely to perform good deeds when watched by members of the opposite sex - disclosed in a study published in the British Journal of Psychology- is unlikely to surprise anyone of either sex.

What? Men act like show ponies, even when they are being goodie-goodies? Well, surprise surprise.

The further news that, if a man is sexually attracted to a woman he is more likely to act in an ostentatiously altruistic way than if he is not attracted to her, is another classic from the Bumper Book of No-Brainers. A study finding that men were stimulated by pictures of naked women would have more novelty value.

The researchers reached their conclusions after studying how men and women performed at a specially designed computer game in which participants had the opportunity to keep money or share it with others. But they could have saved their energy.

Ten minutes of watching men and women interact in a pub, or on a train, or in an office, would have led them to the same conclusion.

St Francis of Assisi may have done a few women a good turn without an ulterior motive. Possibly also St Thomas More and St Bob Geldof. But they were the exception that proved the rule.

Men in general are far less scrupulous - and have been since their ancestors crawled out of the primeval swamp.

Most men have such embarrassingly obvious ulterior motives that they can no longer be called ulterior.

Scratch a red-blooded male within sniffing distance of a pretty woman and you find not a mass of crude testosterone, but a remorseless, calculating machine. If I do A, will it lead to B? That same question, again and again, since the dawn of time.

The next time you see a man helping a woman get her suitcase off a luggage rack, don't look at the suitcase. Look at the woman - the grateful audience for whom this little act of chivalry is being performed.

The researchers call this ''peacocking", drawing parallels between the good deeds that a man does to impress women and the extravagant display of tail feathers with which the peacock tries to impress a mate.

But there is no need to give a fancy name to something that men and women alike instinctively understand. A man doesn't have to be a millionaire, or win Wimbledon, or become President of the United States to attract women: he just has to show that he is a good person, capable of behaving decently.

Obviously, the Good Samaritan who overdoes it and wants the world to notice that he is a Good Samaritan is shooting himself in the foot. But a man who knows what's good for him does not go to the opposite extreme and behave like one of those shy philanthropists who give millions to starving orphans without a soul knowing.

If he does something even faintly gallant, like giving up his seat on a train, he will cast a quick look over his shoulder to see if his efforts have been noticed - preferably by the most beautiful woman in the carriage.

If there weren't 1000 different ways into a woman's heart, all equally valid, the species would have died out years ago.

As a gawky teenager in the 1990s - blessed with little by the way of good looks, inherited wealth, bulging pecs or flowing locks - I realised there was much to be gained by simple acts of kindness towards the opposite sex.

From helping with the washing up to mending plugs and offering to walk dogs, I earned a ridiculous amount of appreciation for what felt like pretty footling gestures of goodwill. Was I being cynical? Were the women being gullible? Of course not.

We were simply performing an age-old sexual dance in which both partners understand the moves perfectly: give-and-take elevated to an art form.

A man who acts considerately, demonstrating that he is sensitive to the needs of others, will always trump one who spends hours in front of the mirror. Don't study the research. Just look around you. - The Daily Telegraph