Brown could be back in dock 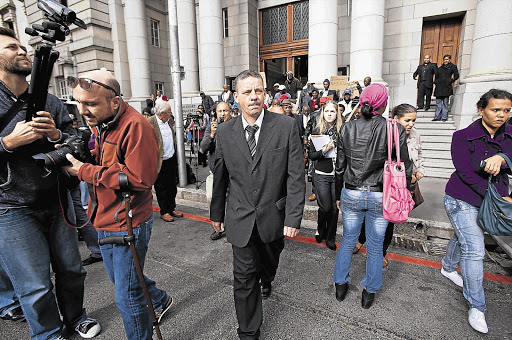 The Supreme Court of Appeal has granted the state leave to appeal against the sentence of former Fidentia boss J Arthur Brown, the National Prosecuting Authority said yesterday.

"We welcome the decision and we will be ready to argue when the matter is on the roll," Western Cape NPA spokesman Eric Ntabazalila said. "At the moment we have not received a date of when we will be visiting the SCA to argue."

The state approached the SCA to ask for a heavier sentence against Brown. Brown was convicted after admitting to making misrepresentations regarding investments entrusted to him.

He was fined R75000 or 18 months' imprisonment, on each of two fraud counts against him.

Brown was also given an 18-month jail sentence on each count, but these were suspended for four years on condition he is not convicted of fraud again.

In June, the Western Cape High Court denied the NPA leave to appeal the case. The authority then lodged an application at the SCA.

Yesterday, the NPA announced that the SCA had granted it its wish. The DA also welcomed the decision.

"We trust the Financial Services Board [FSB] will do everything in its power to assist the NPA with this appeal and timeously disclose all evidence in its possession," DA MP Tim Harris said.

"In this instance it is not clear that they performed their responsibilities appropriately."

FSB chief financial officer, Dawood Seedat, who had led the investigation into Fidentia, only testified in aggravation of sentencing once judgment had already been handed down.

After the sentence was handed down on May 15 the DA called on the FSB to appear before parliament's finance committee to account for its handling of the matter, said Harris.

"After the FSB initially agreed to appear before parliament, the meeting was dropped at the last minute, ostensibly because of their continued involvement in the case."