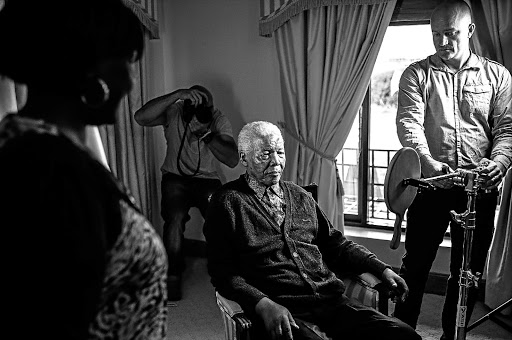 Mandela prepares for his photo shoot. On the left is Kgagare Meme, who manages the Mandela home in Qunu, with Steirn in the background and team member Damon Hyland
Image: SUPPLIED

The portrait of Nelson Mandela publish today to kick off the 21 Icons South Africa project almost did not happen. It is the brainchild of photographer Adrian Steirn, an Australian photographer and filmmaker now living in Cape Town.

PLEASE NOTE:The collectible  portrait of Madiba is available  inside copies of the Sunday Times

The idea came while he was watching a documentary on boxing legend Muhammad Ali, and wondered what it must have been like to document Ali's career at its peak. "As a photographer, I wished I was there to photograph him," said Steirn.

Then he thought of living South Africans doing amazing things - and this sparked the idea that resulted in the 21 Icons project, which celebrates the achievements of 21 South Africans in both the country and the world.

Steirn never thought he would meet Mandela, but after the former president's family saw and fell in love with the project (granddaughter Swati Dlamini worked on it), they showed it to Mandela, who decided he wanted to be part of it.

Mandela's portrait is a reflection of his face in a mirror - looking at the world as the world looks at him. "Nelson Mandela has come to symbolise hope for many South Africans," said Steirn. "He is a man whose life and principles have captured the imagination of the world. I wanted to shoot a portrait that reflected his legacy - a legacy that we can all carry into the future by sharing his integrity and belief that a bright future lies ahead."

Steirn asked Madiba to hold the mirror and look into it as if reflecting on his life. "And when you look at the portrait, I hope the viewer is prompted to reflect on his legacy and on our future," he said.

Steirn travelled to Mandela's home in Qunu, Eastern Cape, for the shoot. In the film accompanying the portrait, Mandela says he never thought he would be released from jail, but one day prison officials came to him and told him: "Mandela, you can go home."

For his portrait of FW de Klerk, Steirn managed to persuade him to sit barefoot in a yoga position, something that is, according to the former state president, "against my nature".

Archbishop Emeritus Des-mond Tutu dances with a tutu as he shares his experiences. Steirn chose the pose because "the world needs another Tutu".

One of the leaders of the 1956 Women's March, Sophia Williams de Bruyn, who is also one of the icons, describes the project as a portrait of "men and women of integrity, but unique in their own way".

The Sunday Times will publish a poster of one of the legends each week for the duration of the project, and SABC3 will air a three-minute film each Sunday, starting tonight.

(Should you miss this video it will available on www.timeslive.co.za home page 7pm July 28.)

Look out for portraits of De Klerk, Tutu, De Bruyn and Greenpeace activist Kumi Naidoo in the weeks ahead.

The project was completed earlier this month after four years of hard work. Steirn described it as a "collection" - not a "selection" - of the most amazing South Africans. He stressed it was not a definitive list and did not rank the individuals. Next year's collection will centre on emerging icons and 2015's collection will feature youth icons.

Steirn had to sell his house to fund the project when no funding came through at the beginning.

He also convinced other photographers to leave their jobs to join him on the project.

"I had no money to pay them, but they jumped on board."

He described the project as "tough and emotional" and the greatest journey of his life.

The portraits will be auctioned and all the proceeds will go to charity.

Dlamini said: "21 Icons pays tribute to my grandfather's legacy and inspires others to carry it forward."

Minister of Arts and Culture Paul Mashatile, whose department is supporting the project, said it fitted in well with its work to promote social cohesion, nation-building and healing.

Sunday Times editor Phylicia Oppelt said: "This is a visually stunning tribute to 21 people who made a significant contribution to South Africa and its standing in the world. For all the difficulties that South Africa faces today, this campaign reminds us that it is possible to overcome huge challenges with dignity, courage and compassion. The campaign inspires us to follow the example of these icons."

Mercedes-Benz, Nikon, Sappi and Deloitte are among the sponsors.