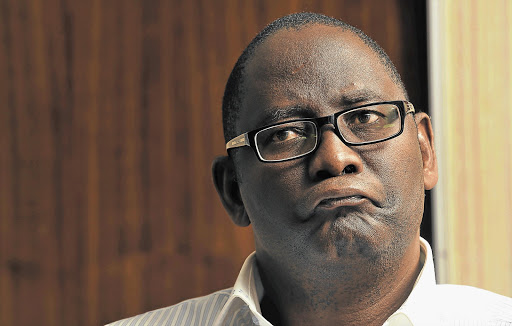 'I was sitting at the SAA check-in counter at OR Tambo International Airport in about 2011 when I first met Zwelinzima Vavi. I did not know who he was or how important he was.

He had a problem with his ticket. I sorted it out. He was grateful and said they [assuming Cosatu] could use someone like me. He took my number and said he would call me.

I was quite excited and told my husband. He was chuffed for me and told me Vavi was the big union boss.

I didn't hear from Vavi. But around a month or two later he arrived back at the check-in counter, this time in the company of his wife. He told her: "This is the girl I was telling you about, the one we should hire."

I didn't really believe it, but this time he put my cellphone number into his phone.

A week or so later he called and asked me to come and see them about the job. He said there were obviously processes to follow. I was nervous but also excited about the prospect of this new job.

We met at his office, just me and him. We discussed the salary package, but no paperwork was signed at that stage. There wasn't even an interview. Vavi said he would inform the other office-bearers that I had been hired and told me to report for duty on January 9 [2012].

My new colleagues were suspicious of me or the circumstances around which I was hired, but I just wanted to do my job. They signed an initial six-month contract with me and I was subsequently employed.

I am a 26-year-old mother. I have been married to my childhood sweetheart for four years and we have two children.

On January 25, at about noon, Vavi, or GS as I called him, came down from the ninth floor of Cosatu House to see me in my office in a quiet area of the building. I was sitting at my desk and he came up behind me. He is a big man. When I got up, he grabbed me and then kissed me.

Then he locked the door. I still have the dress I wore on that day.

I didn't know who to turn to, didn't think anyone would believe me. I wanted him to admit to what he had done. I sent him several SMSes.

Over the next few months, we often talked about work and I tried to carry on like normal ... I wanted to gain his trust so I could get him to admit to what he did.

After confiding in a few people, I decided to record the next conversation I would have with him. I never wanted money. I wanted a confession from him.

I never used this recording. I just kept it. Some time in May, my husband found the recording and I had no choice but to tell him what had happened.

He was fuming and deeply hurt. Funny, but GS always wanted to meet my husband - he was curious about him.

After finding the tape, my husband decided that Vavi's wife must know what had happened. He sent her the recording to her cellphone. I wished he had not done that because this was going to make things worse for me at work. I didn't want to go to work any longer.

We went through hell at home. My husband and Vavi's wife were by now talking on the phone sometimes. She asked to meet me. Some time earlier this month, I met her near Cosatu House. We drove around but could not find anywhere to sit down for a meeting, so we just talked in her car. I told her everything - also what I had heard about him and other women.

I later sent her a text message apologising for what she was going through over what I had told her.

She and I had several other conversations, some via SMS and others via the telephone over the past few weeks.

"She asked me why it had taken so long for me to speak out about the incident. During one of these phone calls she said: "Obviously you don't want to work there any more. What do you want?" She said we must come to some arrangement. I told her I needed another job. She told me: "I'll think of something."

I stopped going to work during the first week of July, the day after I met her. I was in a state.

His wife then sent me a text message asking: "How can we put this behind us?" She later called me saying: "I'm willing to pay you if you promise to keep quiet."

My husband and I talked this over. We figured it would be hard for me to continue working at Cosatu, but I also felt I didn't want to go into another office where I may be hired for my looks.

She asked me to put our demands in writing. She told me to remember that I would not be working for a couple of years, that I'd need money for medical expenses, so we wrote a letter without the help of any lawyers based on what she had said.

We didn't want lawyers involved. We didn't want this to land up in the newspapers. We told her she could have her lawyers look over our letter. We had no idea we were being tricked.

People will judge me today. They will make up their minds about me without knowing who I am. My husband knows me and, although our world has coming crashing down, he is standing by me. There was never a relationship. If there had been one, I had no reason to tell him that I had said no. If there was an affair, I can assure you what Vavi claims was a consensual act between two adults would not have taken place under such circumstances in the middle of the day in my office.

To GS, all I have to say is: it is a sickness. Admit it and get help."