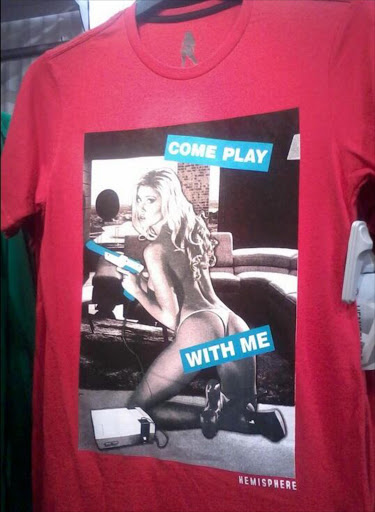 Truworths has admitted that it crossed the line by stocking raunchy T-shirts with a picture of a scantily clad blonde and the line "Come play with me".

Its customer relationship marketing director Emanuel Cristaudo told The Times yesterday that while there had been "no outcry", some customers had voiced objections.

By Tuesday afternoon the T-shirt range had been pulled off the racks, but Truworths stated that the T-shirt was "far less provocative than many others freely available to the public".

Cristaudo admitted: "Though this T-shirt is meant to be tongue-in-cheek it has gone further than we feel it should have."

That same year, the Foschini Group, which owns Markham, came under fire from feminists, HIV activists and Christian groups for a number of T-shirts. One broke down the word "single" into "S: stay, I: intoxicated, N: nightly, G: get, L: laid, E: every day".

"This kind of messaging is part of a backlash against women's empowerment, which is happening globally," she said.

Such messages also try to push women into thinking that they should always be available for sex on male terms, she added. .