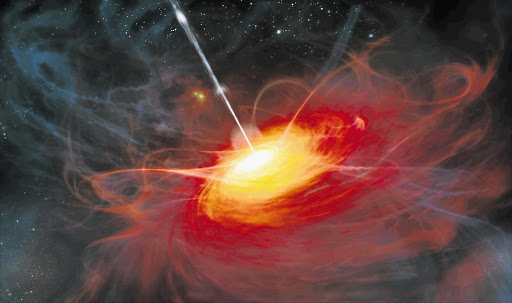 An artist's impression of ULAS J1120+0641, a distant quasar powered by a black hole with a mass two billion times that of the sun. It is seen as it could have been just 770 million years after the Big Bang
Image: SUPPLIED

New research hints the universe might not be expanding at all - and there never was any Big Bang.

For the past century, cosmologists have likened the universe to an inflating balloon, decorated with galaxies. Now one theoretical physicist has pricked this idea. The idea that the universe is unchanging was long ago consigned to the dustbin, thanks to astronomers such as Edwin Hubble in the 1920s.

Hubble analysed with a telescope the light the constituent atoms of galaxies emitted or absorbed, which comes in colours, or frequencies. He knew these frequencies would appear shifted towards the red end of the spectrum if the galaxies were moving away from us.

The telescope revealed that most galaxies exhibit such a "red shift" - and the extent of the shift became greater as galaxies became more distant. The only conclusion was that the universe was expanding. From the point of view of the inhabitants of any one of its galaxies, it looked as if your neighbours were rushing away from you.

This idea suggested that billions of years ago it must have been far denser than it is now, and that it started in a Big Bang.

That thinking has been turned on its head in a paper by Professor Christof Wetterich at the University of Heidelberg in Germany. He said light emitted by atoms is also governed by the masses of their constituent particles, notably their electrons.

The way these absorb and emit light would shift towards the blue part of the spectrum if atoms were to grow in mass, and to the red if they lost it. Because the frequency of light increases with mass, Wetterich said masses could have been lower long ago. If they had been constantly increasing, the colours of old galaxies would look red-shifted.

Wetterich believes his work marks a change in perspective, with two different views of reality: Either the distances between galaxies grow, or the size of atoms shrinks, increasing their mass. Or a blend of the two. A benefit of this idea is he is able to rid physics of the singularity at the start of time, a nasty infinity where the laws of physics break down. Instead, the Big Bang is smeared over the distant past: the first note of the "cosmic piano" was long and low-pitched.