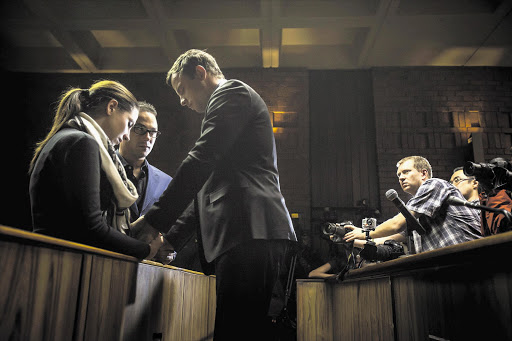 Oscar Pistorius prays with his sister, Aimee, and brother, Carl, in the dock of the Pretoria Magistrate's Court. He was officially charged with the murder of his girlfriend, Reeva Steenkamp.
Image: DANIEL BORN

Lawyers for disgraced Olympic hero Oscar Pistorius are desperately trying to negotiate an out-of-court settlement with the parents of his girlfriend, Reeva Steenkamp, whom he killed on Valentine's Day.

The Times can reveal that lawyers for Barry and June Steenkamp have been approached by the Pistorius camp over their impending multimillion-rand civil claim for loss of income and emotional distress.

Steenkamp and her half-brother, Adam, had helped their pensioner parents financially, including with the rent on their home in Port Elizabeth.

Pistorius's lawyers want to settle the lawsuit before the outcome of the criminal trial, in an attempt to reduce a possible payout.

It is believed the Steenkamps are seeking an estimated R3-million in damages, though lawyers for both sides declined to comment on the amount being negotiated.

The Steenkamps' lawyers did, however, confirm that "intense" discussions were under way.

A Steenkamp family friend said the civil suit, though not entirely dependent on the criminal trial, would be strengthened if Pistorius was found to have killed Reeva deliberately.

"He never denied he killed Reeva. If the prosecution team proves he deliberately killed her it will strengthen the civil case.

"He has robbed her parents of an income . they barely survive . they depend heavily on other people," the friend said.

Pistorius is believed to be anxious to reach a settlement to prevent further financial ramifications and is reaching out to the Steenkamps through his lawyers and his brother.

Carl Pistorius posted a picture of a smiling Oscar and Reeva on Twitter yesterday, on what would have been her 30th birthday, with the tribute "always close to our hearts".

"You will understand this is a very sensitive situation," he said.

Advocate Petrus ''Dup" de Bruyn, representing the Steenkamps, declined to elaborate on the discussions. "Nothing has been decided on yet," he said.

Steenkamp's mother, June, declined to comment on the civil suit: "This is just too much . we are grieving . missing our baby . our beautiful, beautiful daughter who should have been celebrating her birthday today.

"None of this should have happened. We want justice. We want the person who did this to pay," she said.

Meanwhile, in the criminal case, prosecutors Gerrie Nel and Andrea Johnson are finalising the preparation of witnesses they will use to paint Pretorius as a fiercely jealous lover prone to bouts of uncontrollable rage.

Out on R1-million bail, Pistorius appeared bewildered as he stood, wiping away tears, in the dock in the Pretoria Magistrate's Court yesterday praying with his sister, Aimee, and brother, Carl.

The eight-page murder indictment, which includes a charge of unlawful possession of ammunition, provides a glimpse into the state's case, based on the testimony of 107 witnesses.

Among those expected to testify in court are police crime profiler and the head of the SAPS investigative psychology unit, Brigadier Gerard Labuschagne; Pistorius's ex-girlfriend Samantha Taylor and former soccer star Mark Batchelor.

Taylor is expected to testify about the time Pistorius, during a heated argument, allegedly fired his gun out of the sunroof of her car as she drove, while Batchelor will be questioned over Pistorius's threat to break his legs.

Labuschagne will, if called, testify on the Blade Runner's mental and emotional state and evaluate and dispute any evidence given by psychologists called by the defence.

Others who will testify about Pistorius and his behaviour include 17 residents of Silverwood estate, where Pistorius lived and where the shooting occurred. Steenkamp's father, Barry, said the family would have a "birthday dinner for Reeva" last night.

Declining to comment on the court proceedings, he said: "We are doing as best as we can. We are just having a quiet evening together with family and one or two close friends at home."

Pistorius's murder trial is set to be heard in the Pretoria High Court from March 3 to March 20. - Additional reporting by Shaanaaz de Jager

"The balance of probabilities is much easier in a civil case," he said.

Curlewis referred to a civil claim against Fred van der Vyver brought by the parents of his girlfriend, Inge Lotz, who had been killed in March 2005.

Van der Vyver was acquitted of the murder. In 2009, the parents dropped their civil suit after arriving at a settlement. - Katlego Moeng