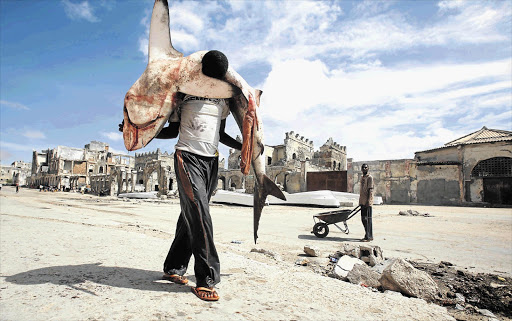 In the 1990s, Dr William Lane published a book claiming that sharks don't get cancer, which is not true. Lane has since made money out of 'shark pills' that don't work
Image: ISMAIL TAXTA/REUTERS

There are few illnesses as terrifying in the public consciousness as cancer. With up to a third of us getting cancer at some stage in our lives, it is almost impossible to remain untouched by the disease.

As an ominous reminder of our mortality, cancer scares us to the point that discussions about it are often avoided and the language we use is couched in euphemisms.

Many of us resort to the internet for information, but much of it is dubious and outlandish. Differentiating between fact and fiction can be difficult, and a host of myths about cancer have found new life online.

While it would be impossible to address all the legends, it is worth dispelling some of the more persistent misunderstandings.

This statement is true in one respect, but it is often framed as "proof-positive" that our world is becoming more carcinogenic.

Age is the single biggest risk factor associated with developing cancer, and as we're living longer, it's hardly surprising that rates are increasing. This means we are now less likely to die of the host of plagues and injuries that ravaged generations before us. What is heartening is that survival rates have also improved substantially due to more effective diagnostic techniques and treatments.

The perceived immunity of sharks to cancer has led to their slaughter to harvest the allegedly curative cartilage; not only is this no good for sharks, it's no good for humans either.

Sharks do get cancer - indeed, pretty much all complex multicellular organisms do, from dogs to elephants.

This myth that "sharks don't get cancer" was popularised in a 1992 book of the same name by Dr William Lane.

It is estimated that North American shark populations have shrunk by 80% in the past decade, with more than 200000 sharks harvested every month to create a pill that doesn't work. It will perhaps come as no surprise to the cynical reader that Lane has built business interests in shark fishing and cartilage pills.

CANCER IS A MODERN DISEASE

Egyptian doctors were recording cancers of the breast some time between 1500 and 3000BC. By 400BC, the Greek physician Hippocrates (he of the oath) had distinguished between benign and malignant tumours. (Incidentally, the early Greek scientists of this period called it cancer because they thought clusters of tumours looked like crab legs. If this seems a slightly odd simile, bear in mind Greek medics were not familiar with dissection and so could only observe protruding tumours.)

The reality is that cancer is an ancient disease, and has likely existed since the dawn of humanity and before it in the primate species from which we are descended.

RADIOTHERAPY AND CHEMOTHERAPY ARE POISONS

In a manner of speaking, yes. Both radiotherapy and chemotherapy damage DNA. Tumour cells are mutants and while they proliferate far more than they ought, they are much more susceptible to damage and much less likely to be repaired successfully than surrounding healthy tissue. As a consequence, a well-planned radiotherapy dose is concentrated on areas where tumours have been located, preferentially killing tumour cells and largely sparing healthy tissue and organs.

The aim of both therapies is to kill tumour cells while ideally sparing non-tumour cells, and this is why they are effective and why they have side-effects. The "poison" mantra is often a banner hoisted by those championing an alleged alternative treatment with no side-effects, conveniently ignoring the fact that cancer treatment without side effects is unlikely to kill any cancer cells.

THERE IS A CURE, BUT BIG PHARMA IS SUPPRESSING IT

The assertion that there is a "supressed" cure for cancer is a depressingly common one.

Cancer is caused by the unregulated division of mutant cells, which can invade adjacent tissue or travel through the body in a process called metastasis. Because cancer can arise from practically any type of cell mutation, there is a huge range of malignancies - some respond well to surgery, others to radiotherapy, and others to chemotherapy. Some tumours are too advanced to cure, but can be treated palliatively with such interventions.

Non-melanoma skin cancer and breast cancers, for example, usually have relatively good prognoses. Other tumours grow rapidly or present with clinical symptoms only when quite advanced, rendering them harder to treat.

One must also consider that each cancer is unique to that patient because it arises from mutations in their own cells. Consequently, the idea of a single magic bullet to treat all these forms with different causes, pathologies and responses should be treated with scepticism.

So too should conspiracy claims, such as this gem from the infamous bastion of misinformation, Natural News: "The cancer industry worldwide is estimated at $200-billion a year. There are many in various associated positions within that industry who would be without a job if that cash flow dried up suddenly with the news that there are cheaper, less harmful and more efficacious remedies available. Big Pharmacy would virtually vanish."

This charge fails even a courtesy examination. If big pharma did possess a cure for cancer, surely their senior executives and researchers would never die of the disease? And, a secret like that is impossible to contain for long.

The final nail in the coffin of this argument is the flashing-light-adorned-elephant dancing in the centre of the room: if there were an effective cure for cancer, why would a pharmaceutical company not sell it?

CANCER CAN BE CURED BY 'X'

The spectrum of alleged cancer cures is alarmingly wide, but typically the product is "natural" and easily acquired - for example, apricot seeds, graviola, mistletoe and baking soda have been championed as cures, despite little or no clinical evidence.

Exotic combinations of everything from herbs to vitamins are sold as potential cures, but there is no evidence that they work. The FDA keeps a list of known fake cancer treatments to combat such misinformation.

Some claim magnets can cure cancer, but the research into "magnetic therapy" shows that such static fields are biologically inert, and this is wishful thinking.

It is also sometimes claimed that homeopathy can cure cancer. This is nonsense because homeopathy has been shown to work no better than placebo and would have to defy known laws of physics and chemistry to be effective.

To quote the late Patrick Swayze, who died of pancreatic cancer in 2009: "If anybody had that cure out there, like so many people swear to me they do, you'd be two things: you'd be very rich, and you'd be very famous. Otherwise, shut up."

Cancer is scary, but it should not be forgotten that treatment options and outcomes have never been better and continue to improve.

Misinformation can cause serious and potentially tragic problems. It is natural for people to have concerns and questions, and a talk with one's physician, nurse or healthcare adviser can do much to answer these and assuage fears.

While the internet is a potentially fantastic source for information, great care must be taken to avoid treating spurious information as factual.

Carl Sagan's famous dictum that "extraordinary claims require extraordinary evidence" should always be kept in mind when dealing with promises of miracle cures. - © The Guardian

Grimes is a physicist and researcher at Oxford University