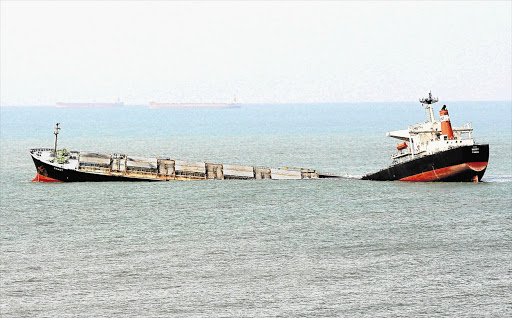 The "emergency" dumping of 10000 tons of coal into the ocean to try to salvage the bulk carrier the MV Smart might harm the endangered humpback dolphins that use the area as a feeding ground, said marine biologists aligned to the Endangered Wildlife Trust.

The MV Smart was holding 147000 tons of coal before it ran aground on a sand bar on August 19, near Richards Bay Harbour.

The Department of Environmental Affairs yesterday gave the green light for the dump as an "interim measure".

Department spokesman Zolile Nqayi said yesterday about 50000 ton s of coal spilt into the ocean soon after the vessel ran aground. "The [ship] has split in two, making it almost impossible for the salvagers to carry out alternative dumping solutions," said Nqayi.

Shanan Atkins, a biologist at the Richards Bay Humpback Dolphin Project, said while the dolphins might not be directly harmed by the coal, it would affect the fish the dolphins rely on for food.

"Direct effects of coal dust on the health of humpback dolphins are probably minimal. Like in humans, it could cause constipation.

"Of greater concern are the indirect effects. The coal particles may block the gills of fish, essentially suffocating them, further diminishing the dolphins' prey, which is already pressured by overfishing and habitat degradation," she said.

The humpback dolphin is currently listed as "near threatened" on the International Union for Conservation of Nature red list.

"It is a rare species of dolphin," said Atkins.

"There are not many of them in South Africa."

He said according to a 2002 study, there were about 100 humpback dolphins around Richards Bay, the biggest population on the KwaZulu-Natal coast. Nqayi said the dump was decided on after extensive consultation between the department, salvagers, the South African Maritime Safety Authority, the uMhlatuze municipality, Ezemvelo KZN Wildlife and the provincial department of environmental affairs.

"Though there are important estuaries such as the uMfolozi, uMlalazi and the uMlathuze Sanctuary near the area where the vessel ran aground, the area directly around the vessel is not a biological diversity hot spot.

"It is an industrial area which is dredged annually.

"Nonetheless, the department will do all it takes to ensure that these neighbouring estuaries are not affected by the salvage operation," said Nqayi.

Sobantu Tilayi, executive head at the South African Maritime Safety Authority, said dumping the coal will make it possible to tow the ship away from the sand bar and further into ocean, where it will be sunk.