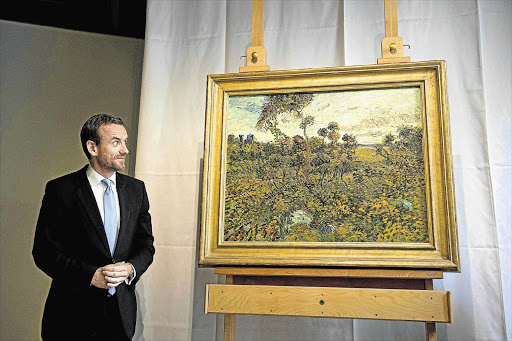 A Vincent Van Gogh painting that was discovered in a Norwegian attic has been unveiled in what is the first discovery of a full-sized canvas by the Dutch master since 1928.

The painting, Sunset at Montmajour, a landscape of trees and sky in the south of France in Van Gogh's familiar thick brush strokes, was painted in 1888. It has been lying in the attic of a Norwegian collector who bought the painting in 1908, but dismissed it as a fake.

The painting was unveiled at the Van Gogh Museum in Amsterdam yester day, with Axel Rueger, the director, describing it as a "once in a lifetime experience".

The painting was authenticated based on comparisons with Van Gogh's techniques and a letter he wrote in which he described the painting.

It can be dated to the exact day it was painted because Van Gogh described it in a letter to his brother, Theo, and said he painted it the previous day - July 4 1888. He said it was done "on a stony heath where small twisted oaks grow".

Researcher Teio Meedendorp said he and other researchers "have found answers to all the key questions, which is remarkable for a painting that has been lost for more than 100 years".

The painting was listed among Theo van Gogh's collection as number 180, and that number can still be seen on the back of the canvas. The work was sold in 1901.

The long lost painting was made at around the same time as some of Van Gogh's most famous works, including Sunflowers and The Bedroom.

"This is a very, very special morning and you're seeing a very, very happy director in front of you," Rueger said.

"When I was told it had been authenticated as a genuine Van Gogh I could not believe it."

The museum declined to be drawn on the identity of the mystery collectors.

It reopened its doors to the public in early May with a stunning new display of some of the Dutch master's greatest works, completing a trio of renovations of the city's most famous museums .