'They saved our lives' 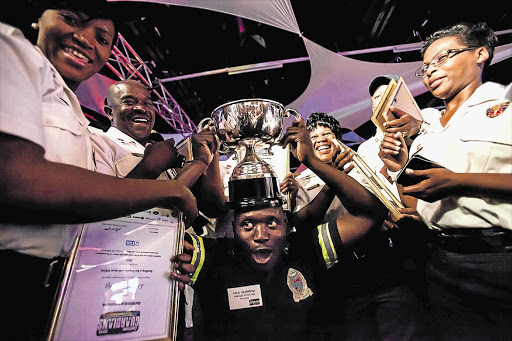 Team Focus celebrate winning the Centrum Guardian Project honours yesterday. The team was recognised for saving 53 people trapped in a bus that had plunged off a bridge near Meyerton last year
Image: DANIEL BORN

Like Snow White, Bronwen Armstrong's fate lay in the hands of seven brave men when she needed them most.

Now, every time she looks at her 11-month-old daughter, she is reminded of the day her seven heroes rescued her.

Cape Town office manager Armstrong, 36, said she was overwhelmed with gratitude for the divers who saved her life and that of 49 other people in October last year. Though she was not aware of it at the time, she was eight weeks' pregnant.

"If it was not for them I would not be here today - nor would my daughter. I would not have had this precious miracle with me today."

Armstrong and Annemarie Wewer were aboard Miroshga, a charter boat that capsized at Duiker Island, near Hout Bay.

The two women thanked their rescuers, who were the finalists of the 2013 Centrum Guardian Project. The awards ceremony, at Emperors Palace, east of Johannesburg, yesterday, was a celebration of all things brave and bold as the men and women in the emergency services were commended for going beyond the call of duty.

Armstrong's rescuers did not win the overall prize, but to her they will forever be heroes.

"It is not every day that a boat capsizes in that area. The one in a million time it happened, I was there and was saved by these wonderful men," she said.

Dubbed Team Focus, they were jointly awarded the title for saving 53 passengers after a bus crashed over an embankment near Meyerton, Gauteng, in June last year. Nineteen people died.

Netcare 911 paramedic Sherry-Lee van der Berg said though it was their job to save lives, the recognition went a long way. "There is no need for us to be thanked, but a thank-you makes a world of difference."

It was team effort that got the winners through the day of the bus accident, said her colleague Renardo Blignaut.

He and the paramedics were the first at the scene.

"Not much talking was happening but we all knew what was expected of us and in that moment, we became one. We became a family," he said.

They do not yet know what they are going to do with the R61009 prize money.

Other finalists included members of the Limpopo police search and rescue team and technicians from the Emergency Medical Services who rescued Polish entomologist Dr Pawel Jaloszynski after he went missing in the Mariepskop Mountains in November last year.