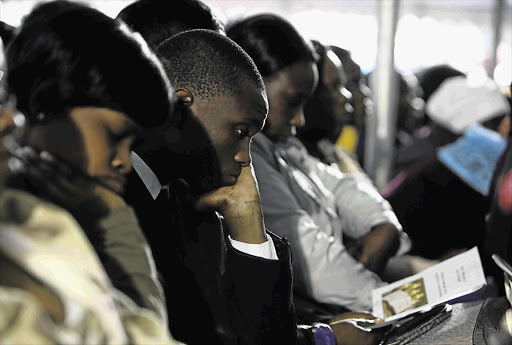 Busi and Mxolisi Ndlovu, who lost their sister Nompumelelo in the Fields Hill crash last week. The memorial service was held at the Kwandengezi Sports Ground, yesterday
Image: THULI DLAMINI

Families of the 22 people who were killed in last week's horror collision in Pinetown believe the truck driver is also a victim.

Sanele Goodness May, 23, from Swaziland has been charged with 22 counts of murder after the articulated truck he was driving wiped out a car and four fully laden taxis on the corner of Fields Hill (M13) and Richmond roads in Pinetown a week ago.

The truck apparently lost its brakes before hitting the vehicles. The collision shocked South Africa as details of flattened vehicles, bloodied victims and a graphic video emerged.

"My heart is also sore for him. The company that employed him should be punished, not the driver," Steven Mokautle said yesterday.

Mokautle's mother, Elizabeth, a 52-year-old domestic worker, was a passenger in one of the taxis.

"When I got to the scene, it was so bad. I thought this is not my mother. Where is my beautiful mother? I still can't believe she is dead. My nine-year-old brother can't understand what has happened," Mokautle said.

"But we can't blame the driver. Everyone needs a job and he was in a difficult position. I don't think he could have told his boss he doesn't want to drive an unroadworthy truck."

Nompula said the company, Sagekal Logistics, did not "have the decency to even meet with us".

The two sisters usually travelled together but on Thursday, Nompulo finished work early.

"I would have been with her in that taxi. She was a bubbly, beautiful person, who had so much potential. She was studying environmental studies as well."

"Nothing can bring them back but I want answers from the truck company. They let this happen."

Dlamini said the growing support and sympathy for May on social networks were justified.

"I feel sorry for him. He didn't do this deliberately. We will hear his side in court but when will we hear the company's side?"

Sagekal Logistics has scheduled a press briefing for Monday to address the allegations against May and the company and to release the preliminary report from its internal investigation.