ON THE BOX: Creative genius Lastborn is on to something 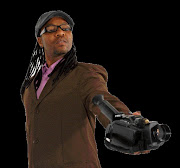 On Wednesday night I, like many others on Twitter, tuned into Vuzu to catch Lastborn Does the Loeries, which became a trending topic on the social network.

The show stars Thapelo "Tips" Seemise, the comic who made a name for himself as Shampoo in David Kau's TV flick Taxi Ride.

Seemise plays the titular character Lastborn, who makes adverts for local businesses in his rural hometown of Phokeng, near Rustenburg.

A big fish in a small town, Lastborn decides his work is worthy of the Loeries, the local advertising awards. So begins his ridiculous but hilarious journey to Cape Town, where the awards will be taking place.

The show is shot as a reality series, and like Sacha Baron Cohen's Borat, Lastborn Does the Loeries finds unsuspecting people and turns them into characters on the show.

Lastborn is an embodiment of the often outdated and patriarchal views many people still hold ("Women are stupid," he often says). Or perhaps I'm over thinking it.

But he also has endearingly simplistic views: "There are mountains in Phokeng. Why would I want to look at mountains in Cape Town?"

When Lastborn eventually meets the awards' chairman Xolisa Dyeshana, we learn his is an ad for an initiation school. The payoff line? "We turn boys into men. Sharp-sharp."