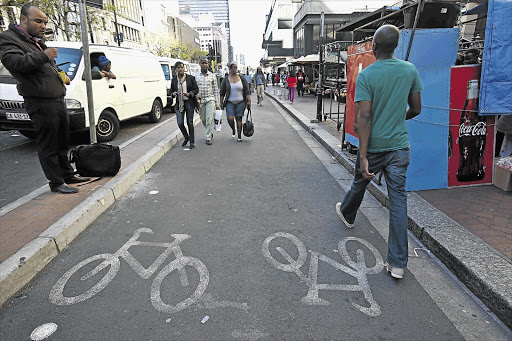 Cape Town spent R800000 on establishing a cycling lane in the central business district - but, according to Capetonians, it is seldom used by cyclists.

Despite this, a member of the mayoral committee for transport, Brett Herron, said the city would go ahead with its plans to expand its cycle lanes to cover 500km by 2015.

In Adderley Street, where 400m of road was converted into a cycle lane at a cost of R800000, opinions about the need for such a lane are divided.

The lane is seldom used by cyclists, with workers and students using par t of it as a "smoking pit". M otor cyclists use it for parking.

Sandra Bosman, a flower seller who has been working in the street for 30 years, said the lane was a hindrance to her business.

"Barely anyone uses this lane.

"They should open it up again so we can get more customers buying our flowers," said Bosman.

"People use it mostly to smoke and park their motorbikes," he said.

Herron acknowledged that not many cyclists were seen using the lane but said he was confident about its sustainability.

"We expect that usage will increase, especially when linkages are completed."

The linkages include the proposed Albert Road cycle lane, which will connect the Adderley Street lane to southern suburbs lanes.

"We are also investigating a public bike scheme, or bike sharing scheme, that will help increase bicycle usage in the inner city. The lanes will no doubt become more active then," said Herron.

In addition to a major bicycle lane running along the route of the city's bus rapid-transit system, Herron said cycling lanes had been introduced in townships such as Bontheuwel, Gugulethu, Langa and Khayelitsha.

But the man who once described the city's bicycle lanes as "racist", because most of them were built in predominantly white areas, said their introduction in townships was a "piecemeal" attempt at correcting the situation.

"They [the council] have clearly not prioritised the needs of the poor," said Tony Ehrenreich, leader of the ANC opposition in the city council.

"Instead they're spending the money where it benefits their contractors.

"It's all about politics and public relations."