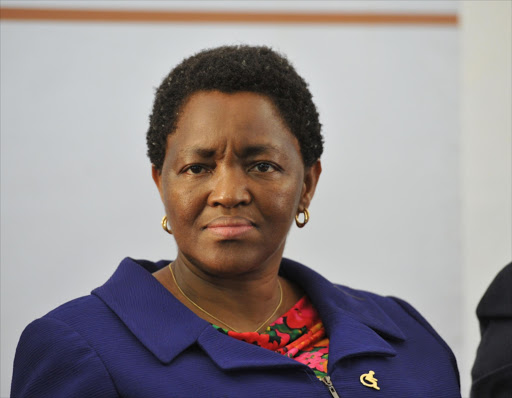 Minister of Social Development, Ms Bathabile Dlamini opens the National Youth Camp on December 2, 2012 in Bloemfontein, South Africa. The aim is to bring together young people from all provinces in South Africa. The event's theme is, "Youth Working Together in Diversity."
Image: Gallo Images / Foto24 / Charl Devenish

The SA Human Rights Commission says the Department of Social Development is violating children's rights by not protecting them from abuse and neglect.

A report by the commission alleges that the department failed to fulfil its obligation tolist the names of all offenders on the national child protection register.

The commission launched an investigation into the maintenance of the register in August last year following a complaint by DA social development spokesman Mike Waters.

The department, the primary custodian of the provisions of the Children's Act, was investigated, as were the Department of Women, Children and People with Disabilities, and the Department of Justice and Constitutional Development.

Other findings against the departments include failure to adequately implement the register, rendering it ineffective. The report also said the register was not a true reflection of the crimes committed against children.

Department of Social Development spokesman Lumka Oliphant said the department was unaware of the report.

"The department has not been given the report by the Human Rights Commission and is hearing this for the first time from the media."

Commission spokesman Isaac Mangena said the report was sent to the department on Tuesday.

The commission found that the failure by the department to properly maintain the register weakened the state's ability to protect children.

"This resulted in a violation of every child's right to be protected from . neglect, abuse or degradation," Mangena said.

Police statistics show that more than 104000 children fell victim to crimes such as murder, attempted murder, sexual assault, common assault and assault to do grievous bodily harm between 2010 and 2012.

The register was introduced in 1998 with the intention of protecting children from abusers.

It consists of two parts. Part A is a record of all reports of child abuse or deliberate neglect of a child. Part B lists people found unsuitable to work with children, including those convicted of sexual abuse.

Once registered, such people are prohibited from working with or around children.

"The register provides a useful means by which employers can vet prospective employees by checking their names against the entries in [it]."

Social Development Minister Bathabile Dlamini said the S A Council of Educators had not established if any teachers were named in the register - though 289 sexual abuse cases were lodged against teachers between 2009 and 2012.