Jobs was smarter than this 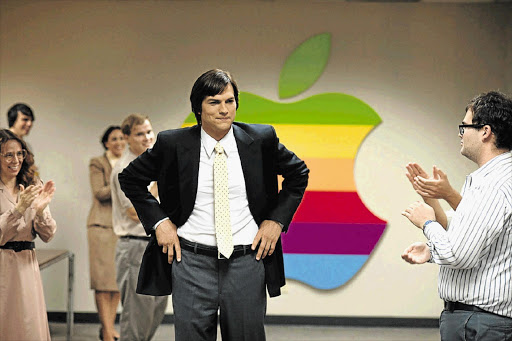 RUTHLESS AND SELFISH: While Ashton Kutcher has Steve Jobs's physical presence down pat, he never gets in touch with the emotions of his character

We get the right look and the geeky buddies, but not the man's complexity. writes Tymon Smith

As an Apple user of long standing, I understand how Steve Jobs's Zen-inspired minimalist design aesthetic changed the face of modern technology.

So what was it about Jobs that led him from college dropout to, by many accounts, the most creative entrepreneur of his era?

This biopic, directed by Joshua Michael Stern and starring Ashton Kutcher, is not the place to go to if you want a real answer to that question. It turns out that casting one of the world's dumbest men in the role of one of the smartest doesn't work.

While Kutcher gives a reasonable physical approximation of Jobs's loping stoop and hunched shoulders, he's never able to get a real emotional handle on his character. Although we're shown Jobs and his geeky buddies working on the original prototype in his foster parents' garage, there's not enough investigation of what was behind the design innovations that made Apple unique.

Many of Jobs's personality traits - his ruthless dedication to success, his selfish attitude to personal relationships and his willingness to cut out partners who were instrumental in the initial development of the brand - are grossly under-explored.

There is little in the way of examination of how Jobs felt about what he did to people. The filmmakers seem content that Jobs's vision was so strong that casualties were just a necessary part of the process.

Also, by focusing on the period from Jobs's dropping out of college to his initial work at Apple, and then taking up the story again with his return to the company in 1996 following his dismissal in 1985, the film favours the brand at the expense of the man.

Kutcher offers a supremely superficial performance - like looking at a MacBook in the iStore without testing it. Much better is the tubby, affecting Josh Gad as Jobs's long-suffering collaborator, Steve Wozniak.

For a man of innovation, this lacklustre piece of traditional hagiography is hardly a fitting cinematic tribute. Only Bill Gates will be happy, as he'll be showing it at his house as an example of how not to make his biopic when the time comes. Once again riding on the coat-tails of his more creative competitor.

Like the man it's about, 'Jobs' is thin and unassuming, but keeps surprising you with ideas and innovation. An almost ironically styled old-fashioned biopic, this sharp look at the late Steve Jobs and the technological and cultural changes he brought about is entertaining and smart, with a great performance from Ashton Kutcher. - Joe Neumaier, New York Daily News

For a movie that takes so much time bashing us with the obvious notion that Jobs loved innovation above all else, it offers nothing new to film-making or his story. - Brian Moylan, The Guardian

It would drive Jobs nuts to know that the new movie about his life has all the sex appeal of a PowerPoint presentation. - Manohla Dargis, New York Times